The Socialist Unity gang has posted (without further explanation or comment) a video of an interview with “Ukrainian rebel leader, Igor Strelkov, after rebel breakout of Slavyansk in Eastern Ukraine.” (In fact Strelkov is not Ukrainian, but a Russian from Moscow.)

Since SU has consistently backed the pro-Russian (and often simply Russian) fighters who occupied Crimea and turned it over to Russian control, and who are now trying to capture the rest of eastern Ukraine for Moscow, I can only assume that they approve of Strelkov– even if Vladimir Putin seems to have lost some interest in the whole business.

Perhaps Strelkov’s closing words made the SUers go weak at the knees:

“Advancing against us are real fascists, fascists in the very same sense that our predecessors understood this word. Monsters, murderers, marauders, pure polizei, Banderovtsy, just like they once were.
…..
“They are genuine Nazis that hide behind the ideas of ‘United Ukraine’ to perpetrate ethnic cleansing. And they are effecting it. And that is why we will be resisting in Donetsk just as we had been resisting them in Slavyansk, only far more successfully.”

But maybe they should have checked his background first.

According to The New York Times:

An ultranationalist and reactionary, Mr. Strelkov fits an increasingly familiar profile in Russia, one that has emerged strongly with the re-election of President Vladimir V. Putin. Messianic and militaristic, such figures combine a deep belief in Russia’s historic destiny with a contempt for the “decadent” West, while yearning for the re-establishment of a czarist empire.

“Strelkov is almost a caricature of the Putin era,” said Mark Galeotti, an expert on the Russian security services at New York University.

A former intelligence agent, Mr. Strelkov fought in the post-Soviet conflicts in Transnistria, Serbia and Chechnya. Yet his ideological rigidity precedes any connections he has to Russia’s security services, stretching back at least to his days at the Moscow State Institute for History and Archives. There, Mr. Strelkov obsessed over military history and joined a small but vocal group of students who advocated a return to monarchism.

“This is a person who lives in the beginning of the 20th century,” said Aleksei Makarkin, who studied with Mr. Strelkov in college. “He was like this even back then.”

The Times reports that while in Slavyansk, Strelkov (who has retreated to Donetsk for a final stand) approved the execution by firing squad of a 30-year-old man for stealing a pair of pants and two shirts.

From the documents left behind in his headquarters, it is obvious that he ran his own iron-fisted show in Slovyansk. In the fetid basement of his headquarters in the local security services building, which served as a dungeon for some of his dozens of hostages, a ceramic bowl full of prison food remained, uneaten and curdled. Socks still hung to dry from wooden sticks wedged into the wall. A plastic bottle collected drippings from the ceiling — water the detainees likely used to wash themselves with a single shared bar of soap.

When [Strelkov] takes time off from modern wars, it seems he likes to pretend he’s fighting past wars. His passion is military reenactments of great battles. Posted on the Internet are photos of him dressed up like a Russian Empire White Guard officer, a WWII Soviet soldier and even an Ancient Roman Empire legionary.

Here he is (at left) wearing a suit of armor: 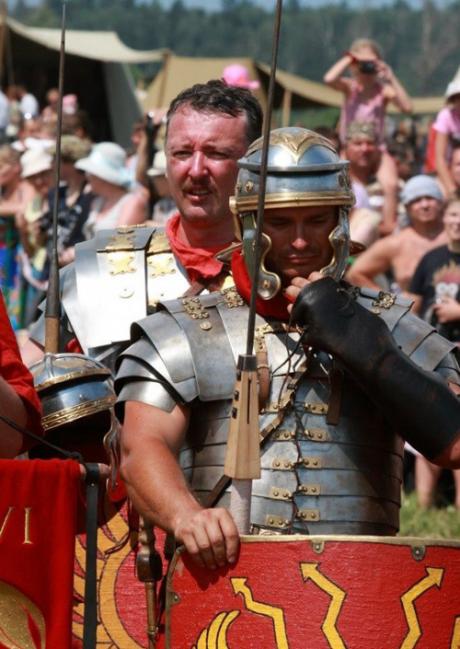 [Strelkov]’s first Ukrainian mission was in Crimea. A month before Russia occupied the peninsula he went there supposedly to guard the Magi Gifts, sacred objects of the Russian Orthodox Church, sent from their repository on Mount Athos in Greece to Simferopol, in Crimea, as a show of support for the Russian-speaking population. [Strelkov] reportedly used the trip for reconnaissance and met the leading secessionist there, the gangster (and now prime minister) Sergey Aksyonov.

And Brian Whitmore at The Power Vertical notes that Strelkov– who fought in Bosnia on the side of the Serbs– is a contributor to the far-right and antisemitic newspaper “Zavtra,” founded by ultranationalist Aleksandr Prokhanov in the 1990s.

The newspaper’s website now serves as a recruiting platform for mercenaries fighting in eastern Ukraine.

According to the Anti-Defamation League, white supremacist David Duke visited Russia at the invitation of Prokhanov and Konstnatin Kasimovsky, the head of an anti-Semitic organization called Russian Action.

At the time, several Russian nationalist publications ran reports on Duke’s visit to Moscow. An Internet forum of Russian neo-Nazi skinheads praised the meeting with Duke, who was termed “a well-known American patriot.”

Of course another one of Socialist Unity’s favorites, George Galloway, has had no problem being associated with a viciously antisemitic media organization which provides a forum to David Duke. 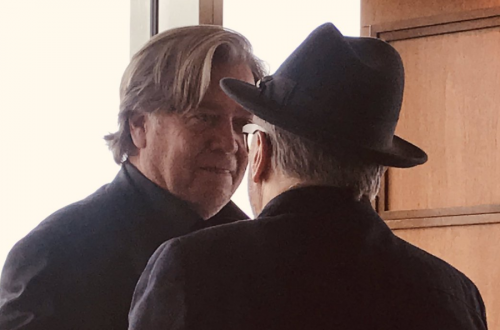