Well done to the BBC for reporting that many of the images being posted on social media which purport to be from Israeli’s current air strikes on terrorists in Gaza, and purport to depict widespread destruction and civilian casualties, are in fact from previous years and/or from other countries.

I’m inclined to agree that the current rocket barrage from Gaza against Israel is a sign of weakness and desperation by Hamas, which no longer can count on the support it once received from Iran, Syria and Egypt. On the one hand this means that a full-scale ground operation by Israel is exactly what Hamas hopes for in an effort to regain sympathy. On the other hand that doesn’t mean Israel can or should sit and take it.

Let’s hope the rocket barrage from Gaza ends soon. But if it continues, and Israel is forced to intensify its response, let’s hope the BBC and other foreign media will be more clear-eyed and hard-headed than they have been during previous Israeli operations against Hamas.

Further update: An event for which the term “the usual suspects” is perfectly suited.

Another update: One of the usual suspects, in all her spectacular ignorance. 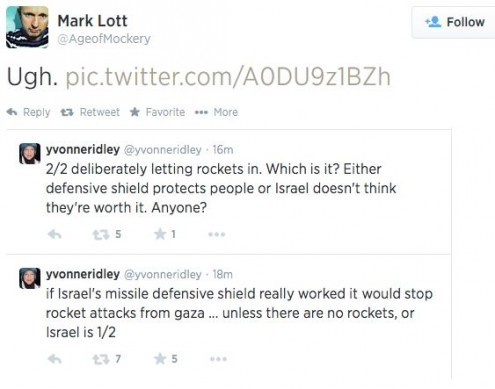 And she was a professional journalist?

Fifth update: Avi Issacharoff at The Times of Israel makes an important point: unlike 2012′s Operation Defensive Shield or 2008-9′s Operation Cast Lead, Hamas cannot claim to be responding to an Israeli military action. The latest rocket attacks on Israel were entirely unprovoked.