In 2010 I posted about a proposal by the US Food and Drug Administration to require graphic warning labels for cigarette cartons.

I linked to a picture of one of the proposed labels and noted that it reminded me of a Mad magazine parody ad from the 1960s (based on the cowboy-themed “Marlboro Country” ads) which probably did as much as anything to keep me from taking up smoking: 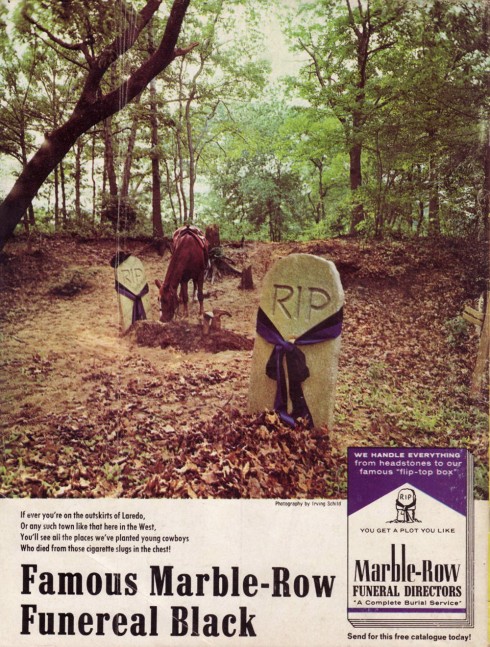 It wasn’t Mad‘s only satirical attack on cigarette smoking and those who promoted it. As The New Yorker noted:

In the early to mid-nineteen-sixties, both before and after the Surgeon General issued his famous report on the dangers of tobacco, Mad took on the industry more than any “respectable” magazine. Free from any dependency on advertising, Mad could be fearless, and it was. Its campaign of ridicule was unrelenting.

The magazine attacked not just the tobacco giants but the folks on Madison Avenue who hawked the poisonous products—many of whom, it noted, were too smart to smoke themselves.

As for the new warning labels, unfortunately the FDA decided to drop them after an appellate court struck down the proposal last year.