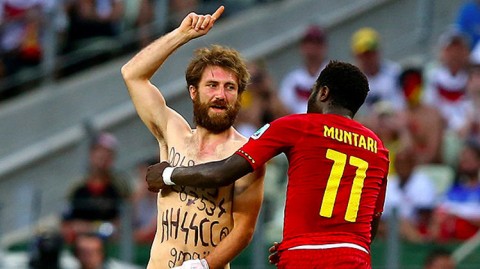 It doesn’t say much for security at the World Cup in Brazil that an asshole with pro-Nazi messages on his torso was able to invade the pitch during the Germany-Ghana match. And nobody seemed in much of a hurry to remove him.

Said asshole was finally ushered off the field by the Ghanian player Sulley Muntari, who would have been entirely within his rights to take a swing at him.

Update: quizblorg writes in the comments:

This story appears to be a canard. Apparently the guy is looking for work to finance his trip back to Poland from Brazil, and the message on his torso is just what it looks like – his contact details. The only reason why it’s being called a pro-Nazi message seems to be that the number 44 in his email adress has been mistaken for the SS rune symbol (it’s obvious that it’s a 44 on his back).

The “HH” also looked like a reference to “Heil Hitler.” But it appears both Yahoo and I jumped to an unjustified conclusion, and I wish to apologize for that. Clearly the man in question did not deserve to be hit.