One’s used to sensational headlines and tendentious reporting about Islam/Muslims from the tabloids.  But it’s a pity to see the Spectator stooping to this kind of level. 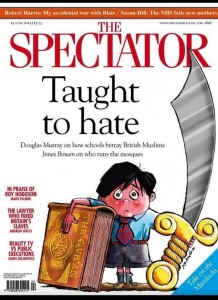 The Trojan Horse story has generated a lot of discussion of what might be meant by words such as ‘extreme’ and ‘radical’.  For example, in response to this summary of the situation from Tokyo Nambu:

Is there evidence of extremism, scary violent extremism? No.

No one was expecting to find kids making bombs.

But rather than focus on the actual main problems in some of these schools (illiberal religious conservatism and very poor governance) the Spectator offers an unambiguous symbol of violent extremism, a huge curved sword.  That’s bad enough in itself, but in his other hand the child clutches a copy of the Qur’an.  This seems to implicate the entire religion, and all who follow it, in extremism, whereas in fact some of the sharpest exchanges on the issue have been between Muslims.  This kind of inflammatory imagery will add to the fears felt by some Muslims that this has been a witch hunt against Islam, not an attempt to tackle legitimate concerns.