Here’s another line the Luton Islamic Centre has used in its defiant reaction to investigations of extremism:

Our library has a selection books on all faiths, as well as various children’s fiction and non-fiction, for example Roald Dahl, George Orwell and Ann Frank.

Enlisting Frank for its cause is grotesque. The Luton Islamic Centre is one of the worst purveyors of antisemitic hatred in the whole country.

Let’s start with a lament about the “ummah” not being victorious. It is a straightforward call to violence:

“And make ready against them all you can of power, including steeds of war (ie weapons) to threaten the enemy of Allaah and your enemy, …” [Al-Anfaal (8):60]

We ask Allaah that He grant us the ability to pursue the proper means for gaining victory over the Jews and over the rest of the enemies of Islaam.

Another lament resorts to gross denigration:

How do the brethren of swine and pigs have the upper hand over the best Ummah among all the other Nations !?

Here is some more guidance.

In essence, the Qur’an states that the Christians will always treat the Muslims better than the Jews will treat the Muslims. Indeed, the full impact of such a statement can only be felt after careful consideration of the real meaning of such a verse. It is true that many Christians and many Jews have become Muslims, but as a whole, the Jewish community is to be viewed as an avid enemy of Islam.

For more on the nefarious nature of “the Jews”, see this insane rant:

The jews strive their utmost to corrupt the beliefs, morals and manners of the Muslims. The jews scheme and crave after possessing the Muslim lands, as well as the lands of others. They have fulfilled some of their plans and continue striving hard to implement the rest of them. Even though they do engage the Muslims in warfare involving strength and arms and have occupied some of their lands, they also fight them by spreading destructive thoughts, beliefs and ideologies; such as Freemasonry, Qadiaanisim, Bahaaism, Teejaanism and others – seeking the support of the christians and others, in order to fulfill their objectives.

Mind you, Jews are useful in one way: they a marker for Muslims. This is from a mosque sermon:

Oh, and don’t forget that Qadir Baksh, the centre’s leader, turns to the former KKK racist horror that is David Duke for wisdom on the Jews. 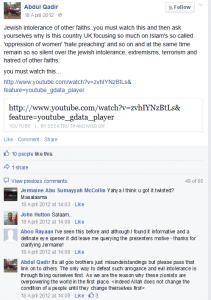 There’s more in the Luton Islamic Centre’s record but surely this is enough to demonstrate that it is a promoter of the most base antisemitic hatred.

This too will probably be ignored or whitewashed by all sorts of “interfaith” idiots and self-styled “anti-racists”.