Despite hysterical warnings from certain quarters of an impending fascist takeover in Ukraine following the Maidan uprising, the two far-right Ukrainian nationalist parties– the Right Sector and Svoboda– got a combined total of just over 2 percent of the vote in Sunday’s presidential election, according to exit polls.

Anyone expect an acknowledgement of this from the Socialist Unity/Morning Star/Galloway nexus?

Unfortunately the EU parliamentary election results from France are much more discouraing, as the extreme-right National Front of Marine Le Pen came in first with about 25 percent of the vote.

Marine Le Pen’s father Jean Marie, the former National Front leader and now the honorary president, was reelected to the the EU parliament from the NF. 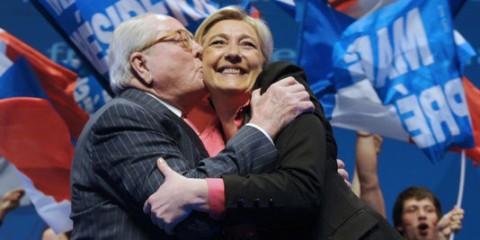 Jean Marie Le Pen, who famously called the Holocaust a mere detail of the history of World War II, is the godfather of a child of the antisemitic “comedian” Dieudonné.