Republican governor Rick Perry of Texas is excited about the Texas economic model which has lured Toyota away from the high-tax Democratic-leaning state of California to the free market paradise of Texas. That is Perry’s spin on things, and the way things were played up on Fox News.

However, Toyota is coming to Texas not because of free market ideology but because of the state’s interventionist policies– a crude sort of industrial policy.

As reported by The Wall Street Journal:

Texas offered Toyota $40 million to move, part of a Texas Enterprise Fund incentive program run out of the governor’s office. At $10,000 a job, it was one of the largest incentives handed out in the decade-old program and cost more per job created than any other large award.

Get it? Texas is using taxpayer money to pay Toyota to come to Texas. If that is what free market economics passes for today, Milton Friedman must be rolling in his grave. Likewise the Toyota example is not some random anecdotal story. To get Chevron to Houston, the state of Texas paid the company $6,800 for each employee. Texas paid Apple $3,600 for each of its employees to relocate to Austin.

The Toyota story is a bad attempt at a Red State vs Blue State economic model. Why? Because as this graph shows, California has recovered from the recession just as well as Texas has, and in some cases even more: 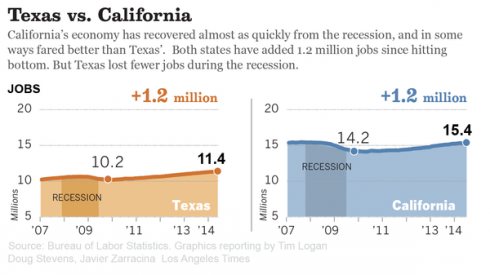 Just last month Rick Perry challenged New York governor Andrew Cuomo to a debate. If Perry is wise, he would avoid challenging Governor Brown of California; according to the Policy Institute of California in a 15-year study, only 2% of jobs lost in California were due to companies leaving the state.

I think it is great that Texas is having an economic boom. Credit should go where credit is due: Perry has done a good job in some areas helping Texas’s economy. However it takes a lot of temerity to pay companies to relocate to your state and then turn around and claim that it is a vindication of low taxes and fewer regulations. What Texas is doing is not out of the Milton Friedman playbook but rather out of the Ha-Joon Chang playbook. It is too bad Perry can’t be honest with himself to admit it.