The American Civil Liberties Union (ACLU) has recently been up in arms against a planned monument to the Ten Commandments on the state Capitol lawn.  Whereas ACLU thinks there should be no religious monument whatsoever, a group called Satanic Temple is taking a different approach, proposing the addition of a further statue.  It’s rather striking. 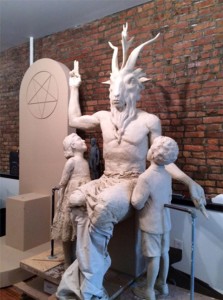 The different strategies adopted by ACLU and Satanic Temple reflect different interpretations of, or emphases within, secularism.  I favour the Satanic Temple’s approach, which doesn’t restrict religion from some role in the public square, but does oppose religion, or any one religion, being privileged.

The local ACLU opposes Satanic Temple’s bid on some counts.

“Their basis for saying we have right to have this on the Capitol lawn is inconsistent with our case. The state shouldn’t have a religious monument at all,” said Brady Henderson, the organization’s legal director.

Greaves said the monument aims only to match the Ten Commandments monument’s testament to Judaism and Christianity.

“In Oklahoma, some say the Ten Commandments have unique American legal value, that it’s the foundational document on which our laws are based. It doesn’t take too much intellectualizing to argue against that. You’ve never seen the Ten Commandments codified into state law because they are against the Constitution,” Greaves said, arguing that the commandment “Thou shalt have no gods before me” is an attack on other spiritual beliefs.

Greaves said that Satanic Temple would stop its bid to place its monument on the Capitol lawn if the Ten Commandments monument were removed as well.

Henderson said that in light of that promise, he agrees with Greaves.

“That makes perfect sense,” Henderson said, “My impression of what they’re doing is they are saying, ‘Hey, if you have one religious view out there, you should represent others.’ The state can represent multiple religious views or none at all.”

Satan doesn’t figure much in modern Anglicanism, the focus of the popular BBC comedy Rev, although there is still plenty of conflict.  In a baffling review in the Guardian, James Mumford complains that the programme undermines the church.

Yet it remains an outsider’s perspective. An insider view of the church would, by contrast, revolve around the reality of shared faith. From the outset, Rev’s operating assumption is that faith is individual. The Rev Smallbone’s prayer monologues are purely personal. Faith is not something held in common. Nor is it transformative. Which is, rightly or wrongly, what people of faith think it is. Perhaps the show’s most wonderful character, the drug addict Colin, is a parishioner Adam is genuinely friends with. But there’s never a question of faith freeing him from addiction.

In imposing its own outsider viewpoint, Rev defies the deepest ideal of a liberal, pluralistic society. In Rev the devout do not speak for themselves and therefore are not permitted to sit at the high table of our national media.

The show certainly promotes a socially liberal agenda.  But it also seems to take religion very seriously.  If it works on the assumption that it is perfectly fine to celebrate same sex marriages in church – it also seems to work on the assumption that Christianity is not simply a vaguely Good Thing, but that it is true. This post (from a Catholic perspective) seems to capture the tone of the series more accurately than James Mumford:

I have just watched the last two episodes of ‘Rev’, broadcast on BBC2 on 21st and 2th April. I watched with tears pouring down my cheeks as Adam experienced with Christ his own passion, death and resurrection. Congratulations to the BBC for broadcasting this programme. Sadly, it can’t be used in schools for RE as the language means it can only be shown after the watershed.

My own favourite characters are the acerbic Archdeacon Robert and Imam Yousef (was he based on Shaikh Shams Ad Duha?) here enjoying some edgy banter with Adam.