In what may be a hint of widespread anxiety about the foundations of the U.S. economy, Thomas Piketty’s “Capital in the Twenty-First Century,” which is currently sold out on Amazon, is beating books like the science fiction mega-hit “Divergent” and the Pulitzer Prize-winning novel “Goldfinch.” Also in the top five on Amazon is Michael Lewis’s latest, “Flash Boys,” about high-frequency trading on Wall Street.

Have any of our readers read it yet?

Piketty believes that the rise in inequality can’t be understood independently of politics. For his new book, he chose a title evoking Marx, but he doesn’t think that capitalism is doomed, or that ever-rising inequality is inevitable. There are circumstances, he concedes, in which incomes can converge and the living standards of the masses can increase steadily—as happened in the so-called Golden Age, from 1945 to 1973. But Piketty argues that this state of affairs, which many of us regard as normal, may well have been a historical exception. The “forces of divergence can at any point regain the upper hand, as seems to be happening now, at the beginning of the twenty-first century,” he writes. And, if current trends continue, “the consequences for the long-term dynamics of the wealth distribution are potentially terrifying.”
…..
Some people claim that the takeoff at the very top reflects the emergence of a new class of “superstars”—entrepreneurs, entertainers, sports stars, authors, and the like—who have exploited new technologies, such as the Internet, to enlarge their earnings at the expense of others in their field… Piketty rejects this account. The main factor, he insists, is that major companies are giving their top executives outlandish pay packages. His research shows that “supermanagers,” rather than “superstars,” account for up to seventy per cent of the top 0.1 per cent of the income distribution. (In 2010, you needed to earn at least $1.5 million to qualify for this élite group.) Rising income inequality is largely a corporate phenomenon.
…..
Many C.E.O.s receive a lot of stock and stock options. Over time, they and other rich people earn a lot of money from the capital they have accumulated: it comes in the form of dividends, capital gains, interest payments, profits from private businesses, and rents. Income from capital has always played a key role in capitalism. Piketty claims that its role is growing even larger, and that this helps explain why inequality is rising so fast. Indeed, he argues that modern capitalism has an internal law of motion that leads, not inexorably but generally, toward less equal outcomes. The law is simple. When the rate of return on capital—the annual income it generates divided by its market value—is higher than the economy’s growth rate, capital income will tend to rise faster than wages and salaries, which rarely grow faster than G.D.P.

…The Great Depression wiped out a lot of dynastic wealth, and it also led to a policy revolution. During the nineteen-thirties and forties, Piketty reminds us, Roosevelt raised the top rate of income tax to more than ninety per cent and the tax on large estates to more than seventy per cent. The federal government set minimum wages in many industries, and it encouraged the growth of trade unions. In the decades after the war, it spent heavily on infrastructure, such as interstate highways, which boosted G.D.P. growth. Fearful of spurring public outrage, firms kept the pay of their senior executives in check. Inequality started to rise again only when Margaret Thatcher and Ronald Reagan led a conservative counter-revolution that slashed tax rates on the rich, decimated the unions, and sought to restrain the growth of government expenditures. Politics and income distribution are two sides of the same coin.

And Paul Krugman wrote at The New York Times:

It’s generally understood that George W. Bush did all he could to cut taxes on the very affluent, that the middle-class cuts he included were essentially political loss leaders. It’s less well understood that the biggest breaks went not to people paid high salaries but to coupon-clippers and heirs to large estates. True, the top tax bracket on earned income fell from 39.6 to 35 percent. But the top rate on dividends fell from 39.6 percent (because they were taxed as ordinary income) to 15 percent — and the estate tax was completely eliminated.

Some of these cuts were reversed under President Obama, but the point is that the great tax-cut push of the Bush years was mainly about reducing taxes on unearned income.

The gamblin’ man [living off unearned income] is rich
And the workin’ man is poor.

From 1947 to the mid 1970s, earnings for all Americans of all economic classes increased at about the same rate. But then… well, see for yourself: 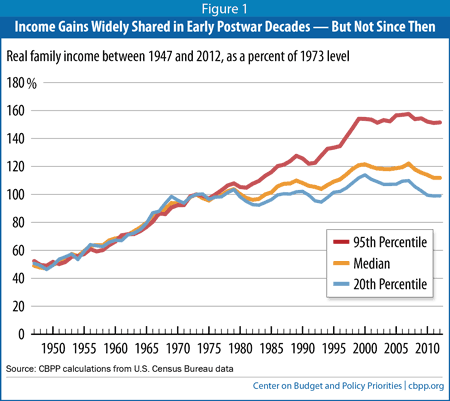 These trends are observable in the real, existing world. For example while six (yes, six) members of the Walmart founder Sam Walton’s family own more wealth than the bottom 40 percent of the US population, many Walmart employees depend on the federal food stamp program (i.e., taxpayer’s money) to help feed them and their families. (In fact the vast majority of working-age non-disabled adults getting food stamps are either employed or have recently been employed.)

The public radio program “Marketplace” recently reported on the need for food assistance among working people in Ohio, where Walmart has replaced General Motors as the largest single employer.

Last summer [Adam Hudson] got a job at a Walmart Super Center in Dayton as a hardware associate, stocking shelves, organizing displays and helping customers, making $8.25 an hour.

Until then, he had a pretty low opinion of the food stamp program. “I’d always considered people who use food stamps as just taking advantage of the government,” Hudson says, because they “weren’t working hard enough to be able to afford for themselves.”

But at Walmart, Hudson saw lots of his co-workers working hard and still needing SNAP [food stamps]. One day after he returned home from work, he was talking with his fiancée, who was pregnant. “She had mentioned that she was hungry—hadn’t been able to eat that day,” he told me. “I kept trying to suggest things we could do, like calling my mom or my dad for a little bit of help…It dawned on us that we can’t afford to feed ourselves and make sure all of our bills are paid and have a car with gas to get to work every day.” A few weeks after Walmart hired him, Hudson enrolled in the food stamp program.

Compare Adam’s situation to that of his father, Jim Hudson, who has never been on food stamps in his life. Back when Jim was a young man, his life was in many ways very similar to his son’s: He was starting a family and looking for a job he could get with no college degree. The plentiful work was not in retail, but manufacturing. Jim got hired at what was, back then, the largest employer in Ohio and the country: not Walmart, but General Motors.

Jim Hudson says his starting wage in 1991 at a GM factory near Dayton, building Trail Blazers, was $9.35 an hour, which in inflation-adjusted 2014 dollars comes out to $16.12 per hour—almost twice what his son makes now. Adam Hudson says he would love a job at the GM plant where his dad worked. It shut down in 2008.

Back when GM was still Ohio’s largest employer, it would not have ranked as a top food stamp employer. It may not have had any workers—even entry-level workers—on food stamps at all.
…..
Put another way, one of the big drivers of food stamp growth in the last few decades is the difference between Jim Hudson’s job at GM and his son’s job at Walmart.

Of course General Motors production workers are unionized, while Walmart makes strenuous efforts to keep its stores union-free. Say what you want about unions, but they do a pretty good job of keeping their members from needing federal programs like food stamps and Medicaid.

Oh, and here’s how much Walmart would have to raise its prices in order to pay all of its employees enough so American taxpayers don’t have to subsidize them with food stamps: