Statement Regarding Marxism Festival 2014 and the Socialist Workers Party

The Marxism Festival is the annual summer school event of the Socialist Workers’ Party (SWP). Our rejection of this year’s request to book rooms at the University of London Union for Marxism Festival 2014 is due to the fact that the Socialist Workers’ Party has, over the last year, proven itself to be a corrupt, rape apologist organisation which prides itself in creating an unsafe space for young women. As elected officers – like many others in the student movement – we see the SWP’s handling of rape allegations against a senior member as a despicable denial of sexism.

Here at ULU we have a clear policy which outlines a zero tolerance stance against sexual harassment and violence. We believe survivors of sexual harassment and aim to offer the best possible support we can. Last year we were angered that the SWP was able to hold Marxism 2013 here but we didn’t not have oversight on what type of organisations hired out ULU. ULU is first and foremost a space for student organisation and we aim to put the welfare of students first. We stated that we were going to bring in measures to ensure that democratically elected officers have powers over ULU conference bookings and we did.

At Marxism 2013, many students and mostly women activists, who attended in order to protest against the SWP, were submitted to verbal and physical abuse by members of the party. This only adds to our concerns for the safety of students at ULU when the SWP is present. Furthermore, criticism of the SWP leadership has been constantly silenced and suppressed at every turn and often met with violent behaviour as well as accusations that it is we who are sexist and sectarian.

The Socialist Workers’ Party has tried to silence any activist within the party who has tried to fight for justice for the women who have been victims of sexual violence at the the hands of the leadership. Instead of supporting those women, the SWP instead started a victim-blaming campaign and protected the perpetrator. To quote a member of the SWP “we aren’t rape apologists unless we believe all women tell the truth, and guess what some women and children lie”.

To the SWP, we say that you are beyond help and progressive debate. You are disgrace to the left and we have no wish to help support any growth in your oppressive organisation. The bottom line is that you do not have any right to use this space, you are not welcome here or anywhere near our union and we will not be harassed by your organisation. As students and activists, we stand united against sexism.

We welcome other student officers of activists to sign. 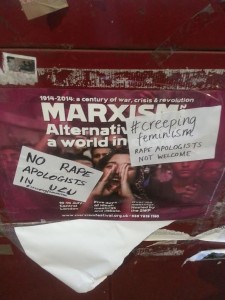