Last week the Venezuelan regime of Nicolas Maduro ordered the arrest of Leopoldo Lopez, leader of the opposition Voluntad Popular party, for his alleged role in a violent confrontation in Caracas that left three people dead.

Although Lopez clearly had nothing to do with the violence, he was accused of, among other things, murder and terrorism.

Today Lopez– a left-of-center social democrat— led a peaceful demonstration of thousands at which he turned himself in to the regime.

And here is Lopez before he was taken away: 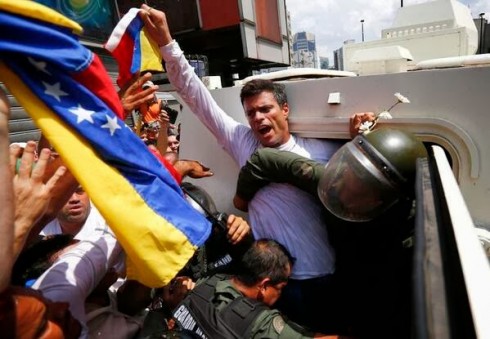 Probably not the image the regime wanted to come out of the arrest.

“I have nothing to hide,” Lopez told supporters before his arrest, standing next to a statue above the crowd.

Minutes later, he surrendered to army officers, pumping his fist and then stepping into the military vehicle with a Venezuelan flag in one hand and a white flower in the other.

“I present myself to an unjust judiciary … May my jailing serve to wake up a people,” he added in the speech.

Lopez, wanted on charges including murder and ‘terrorism’, says he is being made a scapegoat by a dictatorial government.

From inside the military vehicle, he called on demonstrators to clear the way so authorities could take him into detention. As protesters chanted “Leopoldo, the people are with you,” he was transferred to a black van and driven away.

His supporters followed for several kilometers (miles) until he was taken into a military base, with police shutting off access to numerous avenues on the way to control the crowd.

Demonstrators remained congregated on the outskirts of the La Carlota air base in eastern Caracas, and elsewhere.

The regime did what it usually does at times of heightened protest: it ordered the expulsion of some US diplomats for “conspiring” against the government and ordered workers (in this case employees of the state-owned oil company) onto the streets in support of the regime. Government workers are routinely required to attend pro-regime rallies under threat of firing.

As Daniel Duquenal writes at Venezuela News and Views: “This is FAR, FAR from being over.”