It is being reported that Gordon Birtwistle, Lib Dem MP for Burnley, has called for Maajid Nawaz to be deselected. Still more concerning (for genuine liberals) is his suggestion that Nawaz’s membership should be cancelled.  It has been suggested that this letter may be a fake.  There are some slightly suspicious lines/joins which might seem to support this claim, and it also seems odd that the letter bears today’s date.  However the lines do not fall where one might expect them to fall if this was a faked letter – and why would anyone fake something which might so easily be disproved? 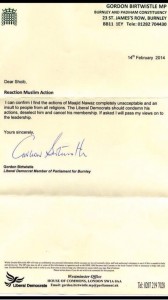 If this is a genuine letter, then it is appalling that Birtwistle is calling for Maajid Nawaz, not simply to be deselected, but to have his membership cancelled.

If this is a fake – that’s pretty appalling too, and will be clearly corrected via updates.