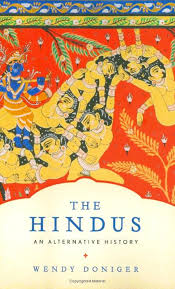 Once again religious sensibilities are being allowed to override freedom of expression.  Wendy Honiger’s The Hindus was first published in 2009 and, as a revisionist account of the religion’s history, has proved controversial.  It is now being reported that Penguin Books India:

… has agreed to withdraw all published copies of Wendy Doniger’s The Hindus. They have reportedly also decided to destroy all remaining copies of the book they have. A copy of the agreement signed by Penguin has gotten leaked on Twitter and Scribd. Firstpost reached out to Penguin India for a response but has not received any official confirmation of the same. However, Wendy Doniger has confirmed in an email to Firstpost that the book is being taken out of publication in India.

Objections to the book rest largely on its application of Freudian theories to Hinduism, although more mundane errors of historical accuracy have also been identified.  Here is part of a petition launched against the book in 2010 by the Sarsvati Research Trust:

“Doniger analyses revered Hindu Gods and Goddess using her widely discredited psychosexual Freudian theories that modern, humanistic psychology has deemed limiting. These interpretations are presented as hard facts and not as speculations. Doniger makes various faulty assumptions about the tradition in order to arrive at her particular spin. In the process, the beliefs, traditions and interpretations of practicing Hindus are simply ignored or bypassed without the unsuspecting reader knowing this to be the case. This kind of Western scholarship has been criticized as Orientalism and Eurocentrism. The non Judeo-Christian faith gets used to dish out voyeurism and the tradition gets eroticised”

Although some have been claiming that all copies of the book are to be pulped, in fact the agreement only seems to apply to copies held by Penguin Books India.  Not surprisingly, many in India have expressed complete outrage at this news.