A Turkish charity which has helped to take British aid convoys through to Syria has been investigated by Turkish police for potential links to Al Qaeda.

The IHH has worked collaboratively with the International Red Cross and Oxfam Netherlands. Earlier this month, Turkish police accused the IHH of arming the Muslim Brotherhood in Syria. One person was arrested at their premises after today’s raids.

Turkish police have conducted an anti-terror raid on the offices of a prominent Islamic charity in what appears to be the latest confrontation between the country’s law enforcement authorities and the government of prime minister Recep Tayyip Erdogan. On a day when police said they had captured leading al-Qaeda operatives at locations across the country, they also detained one person at offices belonging to the IHH, a controversial charity with loose connections to Mr Erdogan’s ruling AK party.

The move, in the town of Kilis, close to the Syrian border, casts a spotlight on the IHH, or Humanitarian Relief Foundation, an organisation that has long raised suspicions in Israel, the US and Germany. The IHH came to prominence in 2010 when the Israeli Defence Force stopped a flotilla seeking to break the blockade of the Gaza Strip, killing nine activists aboard the Mavi Marmara, a ship operated by the IHH. Israeli officials subsequently suggested the group was linked to al-Qaeda and Avigdor Lieberman, foreign minister, recently described it as a threat.

The IHH has consistently denied such ties, emphasising its work providing humanitarian aid to Syria and many other countries across the world. It denounced Tuesday’s raid as a “smear campaign” and suggested it was part of a broader attack against Mr Erdogan’s government by the movement of Fethullah Gulen, a preacher and former government ally with many followers among Turkey’s police and prosecutors.

The FT quotes the IHH:

“These Israel-friendly institutions, organisations or the structures hidden inside will definitely be found out,” said Yasar Kutluay, IHH secretary-general, in rhetoric echoing Mr Erdogan’s. He said the raid had been unlawful, alleging that the police had not presented a search warrant and had illegally confiscated IHH computers.

Is there a link between the IHH and terror?

The IHH mourned the death of Shamil Basayev, the Chechan terrorist who masterminded the massacre of school-children in Beslan.

The IHH even placed a wreath for Basayev outside the Russian consulate: 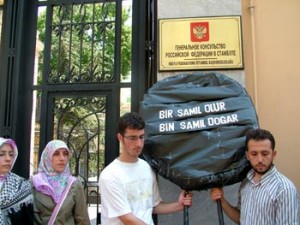 Bruguiere and Ricard also maintained that members of IHH were making routine phone calls to a known Al Qaeda safe house in Milan as well as to European cells of Algerian jihadists, including Abu Ma’ali, a former member of Al Qaeda’s shura, or command council, who is sometimes referred to as a “junior Osama bin Laden.” In the aftermath of the flotilla fiasco Bruguiere told the Associated Press that IHH was “basically helping Al Qaeda when (Osama) bin Laden started to want to target U.S. soil,” a claim the NGO denies. But perhaps most damning of all was Brugiere’s testimony in the trial of Ahmed Ressam – the convicted Al Qaeda operative in Canada who tried to import well over 1,000 pounds of explosives into the United States in 1999 in order to blow up Los Angeles International Airport on the eve of the millennium – that IHH played an “important role” in this planned attack

We should not forget IHH’s close relationship with Hamas. 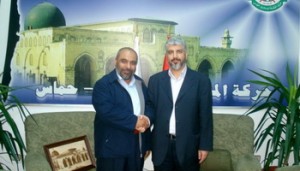 They have partnered with the extremist group Al-Muntada Trust: 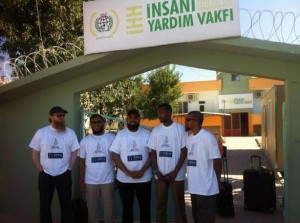 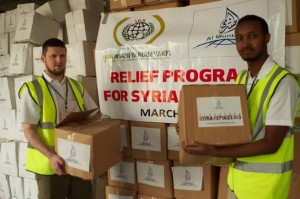 The IHH have also worked with Ummah Welfare Trust and Human Aid UK (the latter being the group with whom murdered British doctor Abbas Khan went to Syria).

Here is IHH’s Bulent Yildrim handing keys to an aid convoy to Ahmad al-Kurd, a Specially-Designated Global Terrorist, and recognised as such by the USA:

Ahmad Al-Kurd [is] a recognized high-ranking Hamas leader in Gaza.  Al-Kurd’s affiliation with Hamas goes back over a decade.  During the first Intifada, Al-Kurd served as a Hamas Shura Council member in Gaza.  As of late 2003, Al-Kurd was allegedly the top Hamas leader in Deir Al-Balah, Gaza.  Since mid-2005, he has served as the mayor of Deir Al-Balah, elected as a Hamas candidate.

You can see IHH boasting about this aid to Hamas in this press release.

The IHH has co-operated with Hamas’ top brass for years, as well as other nasty Islamists like themselves.

It should come as no surprise that Turkey is concerned about the IHH’s activities, but it ought to be of some concern to the UK, that British charities have seen no problem in linking up with IHH.