Karl Pfeifer, a regular contributor to Harry’s Place, will be at the Austrian Cultural Forum in London Monday February 3 at 7 p.m.

He will read from and discuss in English his autobiography, which has been published in German. 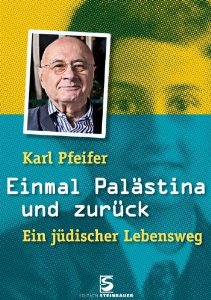 Born in 1928 into a Jewish family in the small town of Baden bei Wien, Karl Pfeifer experienced firsthand some of the major events of 20th century history. In his memoir he recounts his experiences from growing anti-Semitism in his hometown to his escape to Hungary and emigration to Palestine at the age of 14. Pfeifer went on to take part in the struggle to establish an independent Israeli state and was one of the few émigrés to return to Vienna where he worked as a journalist. Karl Pfeifer will be joined by Joanna White to discuss and read from his autobiography.

The event is free, but you need to book in advance.