Giles Fraser has just weighed into the debate over the reconstruction of Israel’s security barrier outside St James’s Church, Piccadilly.

The online reaction to this installation has also been predictably binary. For some it is a powerful testament to Israeli government brutality; for others it’s another example of Christian antisemitism seeping into the liberal church. And some of the graffiti on the Piccadilly wall reflects this same for-us-or-against-us division. Some have written about its illegality under international law; others have written that this wall saves lives.

Although Fraser describes the wall – the real one – as a ‘monstrosity’ he does go on to give a rather more nuanced account which acknowledges the security concerns of Israelis and the decrease in violent attacks as well as the negative effects on Palestinians.  Hope Flowers School, mentioned in a recent post, is just one example – the barrier has caused it huge disruption.

But the binary Fraser offers is a false one.  His fence sitting evaluation of Israel’s security fence is offered as an implicit riposte to those who see this reconstruction as ‘another example of Christian antisemitism seeping into the liberal church’.  For that, it is suggested, would be an extreme perspective. But it is perfectly possible to acknowledge the negative impact of the barrier, even (like Fraser) question whether it is solely responsible for the decline in violence, and still see this stunt as part of a larger pattern of antisemitism in the church – which may of course be neither conscious nor intentional.

Robin Shepherd draws attention to this problem in his recent article surveying NGO Monitor’s report on how NGOs manipulate Christmas. Here is one extract from that report.

This unpleasant yoking of the Christmas story to the Israel/Palestine conflict is familiar from numerous cartoons: 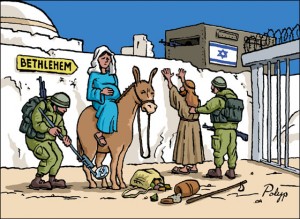 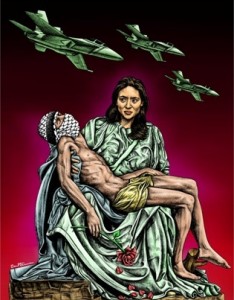 A recent post by Richard Millett draws attention to the unsavoury background of some of those associated with the Bethlehem Unwrapped project (of which the wall reconstruction is just one element).

Maybe Ivor Dembina will reprise his notorious Holocaust “joke” in which he mocks the Jewish people for wanting to hog the Auschwitz limelight. According to Dembina Jews don’t really want others to know that gays, gypsies and the disabled were also murdered at Auschwitz because we like to see it as “Ourschwitz, not Yourschwitz”.

Or maybe poet Rafeef Ziadah will reprise her praising of Islamic Jihad chief Khader Adnan. Adnan, you may recall, is keen to incite Palestinians to become suicide bombers and blow up innocent Israeli children.

Going back to Giles Fraser – he implies that those with moderate views on I/P, those who have sympathy with both ‘sides’, ought to reach the same conclusion as him:

I admire the fact that places like St James’s in Piccadilly are prepared to speak about the multiple injustices created by the wall without succumbing to some nonsense about whose side are you on.

But this is ridiculous – of course ‘Bethlehem Unwrapped’ has taken a ‘side’ – as a brief glance at its line up will demonstrate. Yes, the security barrier causes problems for Palestinian Christians – but this is not because they are Christians.  Rather than spend time and money on this stunt, the Church might have focused its attention on the many Christians around the world who are genuinely being persecuted and even killed for their faith – including the recent victims of bombings in Baghdad. 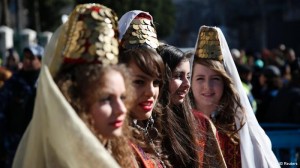 “I have been twice to the market place to witness what the good people of St James are up to with their faux wall advertised as art. By now you all know what it looks like.

Christmas Day brought a long chat to the vicar in attendance that day, dressed in white robes as she was. We missed her sermon as we were busy trying to use their useless felt pens to write on a badly plastered surface (note to me: I must remember not to use their plasterers) but it must have been inspiring as the congregants who emerged were all fired up, one dashing out with a ladder to paint a Lincoln quote about eradicating your enemies by making them your friends. This is exactly what I tried to do and found Tom, Debbie and Sarah, all monitors working the market place that day, to be very friendly – Tom offered me a piece of home made chocolate and Debbie a tray of edible goodies from Fortnums nearby.

On Christmas Day the vicar told us they had recently travelled to Bethlehem (courtesy Amos Trust!) and were assured that the Palestinian narrative had changed to one that is conducive to the removal of the security barrier. I am sure the Fogel family, of whom none of them had heard, would be delighted to know this. It’s just a great pity too few of them are still around to get that message of goodwill from the good people of St James this Christmas Day 2013.

Yesterday, Friday, we went armed with some acrylic paint and a brush. Tom, the monitor, said we could not use paint even though others had done so, as he said they were “professional”. He finally accepted that I am professional in everything I do and led me to a spot where he conceded I could paint one message provided it wasn’t abusive. And so he watched over me as I painted to ensure that I am a lady of my word! I painted in red “THIS WALL SAVES LIVES”

I then noticed a slogan in which the “s” was written to give an impression of a swastika. I was relieved to find that Tom had not previously noticed it, as it would have been devastating to learn that I might have been discriminated against by being watched over meticulously as I painted so that anything abusive could immediately be removed. The good news is that Tom did grey spray over the tail of the “s” to remove any allusion of a swastika, but left what is now a nonsensical word in place. Never mind, as much of what the good people of St James are hosting in their market place this year instead of the usual stalls of goodies for sale, together with their sponsors, Interpal, The Amos trust, War on Want, The Holy Land Trust, amongst others, is political propaganda and claptrap anyway.

I then saw the well versed slogan “from the river to the sea, Palestine will be free”. When I pointed that out, Tom dismissed it as me crossing over into politics, a notion with which the good people of St James are not concerned at Christmas time. The slogan still stands as testament that the abusive comments that are not acceptable are certainly never the propaganda underwritten by these good people of St James, as depicted by a wall in their market place that according to a tour guide who brought the congregation on Christmas Day to hear the sermon, was more “impressive than the photographs I have seen of the real thing”. I couldn’t have explained the entire mission better myself!”

“In the end Tom told me I could paint one message on a designated spot,
provided I was professional and refrained from being abusive. Odd that
seeing that others could write what and where they wanted as many times
as they wanted!

So I painted This Wall Saves Lives, started to
write that 1340 Israeli citizens have died as a result of terrorist
attacks since 2000, but Tom’s space allocation didn’t permit!” 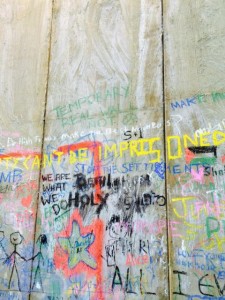 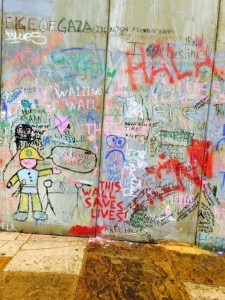 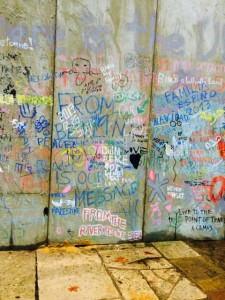 Hat Tips: Harvey and the Heresiarch