Oh dear.  Some commenters under the Huffington Post’s report on this not so subtle dog whistle from the BNP make embarrassing attempts to absolve it from racist overtones. 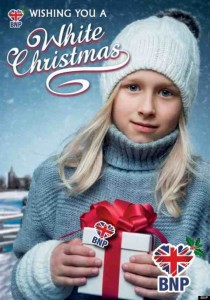 Nothing wrong with it so why are people so intent in reading racial undertones in everything white?

It was wrong to use the word black now its wrong to uise the word white, its political corectness gone mad, people see racial overtones in almost anything… would have been more tactful to put the BNP logo on the inside

On a more cheerful note – here’s a slightly belated thumbs up for this heart warming story from Bradford where the town’s Muslim community have helped preserve the city’s synagogue, leading a very successful fundraising campaign. The chairman of the synagogue and the Secretary of Bradford Council of Mosques have become firm friends:

Now the two men get on so well that when Leavor goes on holiday he gives the synagogue keys to Karim, as well as the alarm code. They have begun what they hope will be a lasting tradition, whereby the Jewish community invites local Muslims and Christians to an oneg shabbat (Friday night dinner) and Muslims return the invitation for a Ramadan feast and Christians during the harvest festival. For the latter, Karim provided halal mince for the shepherd’s pie.