This is a cross-post from trialbyjeory 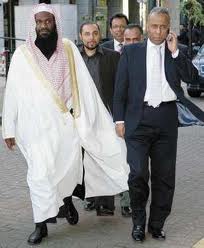 It shows Lutfur Rahman, then the council leader rather than his current position as executive mayor, with Sheikh Adel Al-Kalbani walking by the Tower Hamlets town hall at Mulberry Place.

Behind them are Rofique Ahmed and Shafiqul Haque. Both were then, like Lutfur, Labour councillors. They are now, according to officers who have worked with them, two of the least productive independent members of his cabinet (but they still get some £20k a year for their ‘work’).

Al Kalbani was at that time the Second Imam of Kabbah, the Grand Mosque in Mecca, considered by Muslims as the most sacred place on Earth.

He had been appointed to the position by the Saudi royal family shortly before his trip to the UK where he was attending the annual Islamic Global Peace and Unity event at the ExCeL centre (Lutfur spoke at this year’s gathering last month).

As he had some down time, according to a conversation I had with Lutfur about it a bit later, he decided to pop over to the town hall where he found Lutfur’s office door open and so they had a cup of tea. “He’s a very pious man,” Lutfur told me.

Ever so spontaneously, Al Kalbani then led prayers at the town hall’s second building, Anchorage House, for staff and councillors.

The episode was cited by Cllr Helal Abbas in his dossier of evidence to Labour’s NEC in 2010 as proof that Lutfur was taking a less than secular approach to politics.

In the months and years after his visit, Al Kalbani, a Sunni, seemed to develop some rather hardline views, arguably against Christian and Jews in Saudi Arabia, but particularly about Shia Muslims.

This five minute YouTube video of him in a broadcast interview is fascinating:

He says Shia scholars are apostates (the punishment for whom in Islam can be a bit harsh), that Shia laymen are ignorant, that there can be no such thing in Saudi Arabia as a “Christian citizen”: they can only be guests, because the guidance from the Prophet Mohammed was to drive Christians and Jews from that land.

In Britain, there is increasing concern about the Sunni/Shia divide. Counter-extremism experts believe the crisis in Syria, which on a simple level is Sunni rebels trying to topple Shia President Asad’s regime, might fuel latent dislike.

It is possibly for this reason that the “very pious” Al Kalbani has been refused entry to the UK. Harry’s Place had a piece on this a couple of days ago, while I wrote this article for the Express yesterday. The Home Office refused to elaborate on why his visa was declined.

This Government is clearly taking a much harder line against potential problem preachers coming to these shores.

It means the Water Lily Centre on Mile End Road didn’t have a star guest today, and neither did the Esha’atul Islam Mosque in Whitechapel last night. 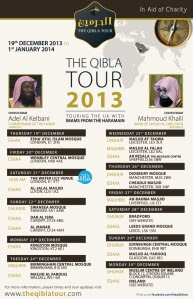 Here’s the piece I wrote for the Express:

ONE of the most senior Muslim clerics in Saudi Arabia has been refused entry to the UK, just as he was to embark on a speaking tour of British mosques.

Sheikh Adel Al-Kalbani, a former senior imam of the Grand Mosque in Mecca, was prevented from boarding his plane in Riyadh on Wednesday.

He was due to fly to London, where he had been expected to give a lecture in Whitechapel last night and another one in Wembley today.

It is not known why a visa for Al Kalbani was refused.

He has previously been allowed into the country and in 2008 he was a guest of the then leader of Tower Hamlets council in east London, Lutfur Rahman.

Since 2008, the Sunni cleric has been quoted expounding potentially divisive views regarding Shia Muslims.

There has been increasing concern among extremism experts over attempts to divide Shia and Sunni Muslims in Britain.

Followers of radical hate preacher Anjem Choudary led a demonstration in London in May against Shia Muslims.

According to the Arab News website, Al-Kalbani had performed the noonand afternoon prayers before heading to the King Khaled International Airport.

He was quoted as saying: “I was stopped at the door of the plane and told that the authorities received a message from the British Embassy saying that I was not allowed to enter Britain.”

He said he had received his visa from the British Embassy in Saudi Arabia in October, just two weeks after submitting his application.

The British Embassy apparently did not explain why he was then later refused.

He said: “I don’t really know why they denied me entry. I was in Britain about four years ago and other countries.

“I was told that other Muslim scholars have also been denied entry and had their visas cancelled.

“My gut feeling is that they don’t want to see me interacting with the Muslim community there.”

He said he would not be appealing the decision. He said Allah “has chosen the best for me”.

Al Kalbani was the star billing on the Qibla speaking tour over the next 10 days.

He was due to talk at the Water Lily centre in Whitechapel tomorrow, then at Luton later in the day, then Swansea and Cardiff on Sunday.

He had a talk planned in Kingston, Surrey, on Monday while Muslims in Birmingham and Walsall were due to welcome him on Christmas Eve.

A Home Office spokeswoman said she was unable to comment on specific individuals, but added: “All visa applications are considered on their individual merits and in line with the immigration rules.

“The onus is on the individual to ensure they provide the correct evidence when submitting an application.”

I’ll leave it for you to debate whether this sheds new light on Abbas’s warning three years ago.