The London School of Economics (LSE) has today issued a long-awaited apology to students Chris Moos and Abhishek Phandis, representatives of the student Atheist, Secularist and Humanist Society (LSEASH), who wore t-shirts featuring the popular Jesus and Mo cartoon at the SU Freshers’ Fair on 3 October, and who were asked to cover their t-shirts or face removal from the Fair.

The incident . . . was described as an “effective blasphemy law”, and said to be indicative of a wider trend around various university campuses across the country, wherein minorities are singled out and targeted under the guise of “political correctness”.

The LSE has published a statement (below), including an apology for the disproportionate action and confirming that the students in question did no wrong. The British Humanist Association (BHA) and National Federation of Atheist, Humanist and Secular Students Societies (AHS), of which the LSEASH is a member, have both welcomed the LSE’s statement. 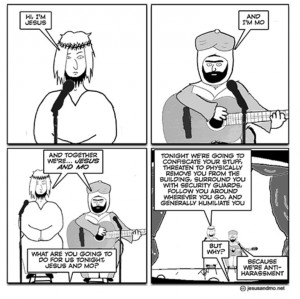 What with this, and the UUK “urgently reviewing” their guidance on gender segregation, it’s been a good week.