The Young Muslim Organisation UK (YMO) is a youth arm of the Islamic Forum of Europe. It has a record of promoting nasty extremists, including terrorists.

Here’s a new chapter in the record. Next week the YMO will host a conference at the East London Mosque’s London Muslim Centre. Here’s the poster. 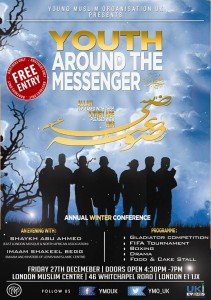 Now have a look at the promotional video. It is a celebration of religious warfare. The man speaking on the tape is none other than Khalid Yasin, a notorious hate preacher who wants gays executed.

Yasin is also a source of great inspiration for terrorists. You can see the whole talk Yasin’s quote in the YMO video comes from here.

This background makes Shakeel Begg a perfect speaker for next week’s YMO event. He is an inveterate champion of terrorists and an enemy of the people trying to catch them.

For example, here you will see Begg finding former Guantanamo inmates “inspiring” and worthy of a divine salute at a conference staged by Cageprisoners, the terrorist support group.

Here is a clip from a meeting of Hhugs, another terrorist support group. This time Begg hails jihad as “the greatest of deeds”.

For more, see this clip from an extremist rally at Belmarsh. He calls the prison’s terrorist inmates “brothers” and rails against their “oppressors”. Note that these are dangerous men who have been snared by the British security and legal systems, not people picked up in Afghanistan and dumped in Guantanamo.

Of course Israel too must be targeted. According to a report in 2006, Begg has told British Muslims they should join the jihad against it.

Shakeel Begg, another radical cleric, recently urged students at Kingston University, southwest London, to wage jihad in Palestine. In a tape-recorded speech obtained by The Sunday Times, Begg, who is a Muslim chaplain at Goldsmiths College, part of London University, said: “You want to make jihad? Very good… Take some money and go to Palestine and fight, fight the terrorists, fight the Zionists.”

The police, by contrast, must not be helped, for they are the devil. Here Begg savages another preacher who spoke at a police conference.

It is ridiculously outrageous for a Muslim speaker to lure the anti-terrorism officers into using him and other religious leaders against the Muslim community. This is not to say that we should not work to prevent unlawful violence. In fact, many have been at the forefront of this work, without signing a deal with the devil, or joining any sort of alliance, be it natural or otherwise, with the brutal, cunning and oppressive anti-terrorism workforce.

For a look at what happens at Mr Begg’s Lewisham Islamic Centre, see this clip of former Guantanamo inmate Omar Deghayes, speaking at a rally for HHugs. He praises terror suspects as “the best among us”.

Here’s the latest lie from the East London Mosque about its record.

We engage in many activities with our faith and interfaith friends – from working with an imams and rabbis council, to hosting Christians during Eid celebrations, and visiting others’ places of worship – and continue to tackle many issues of possible division, in order to ensure our communities live side-by-side with as little conflict as possible.

Actually this YMO event is the real face of the East London Mosque, which is a threat to national security as well as “community cohesion”.

Over its last seven financial years the East London Mosque has received more than £3 million in public sector funding.