I have little doubt that Dr Abbas Khan was murdered by the Syrian Government.

I note that George Galloway – always the staunch defender of Assad – is currently spinning the murder as the result of Assad’s underlings trying to undermine their leader:

The MP for Bradford West said he believed somebody within the regime had killed Mr Khan to defy President Assad’s decision to release him.

Utter nonsense. Can you imagine what would happen, in Syria, to somebody who tried to defy Assad? This is Galloway providing cover to the murderous, torturing regime, which he has supported for so long.

The truth is far more likely to be that Assad appreciated all too well what the impact would be of a British doctor, bearing the scars of his torture, bearing witness in every mosque and lecture hall in the United Kingdom, over the next year:.

Earlier this year, his mother found him in a prison in Damascus weighing just five stone (32kg) and barely able to walk.

He claimed he had been tortured while being detained without charge and held for much of the time on his own.

Better to prevent that, and simply kill him. Dress it up as “a suicide”.

So: the blame for this man’s death falls squarely at the feet of Assad. However, the role of charity which sent this man to Aleppo to die should also be considered.

That charity is Human Aid.

Human Aid is a British charity. If you look at their website, they give every impression of that they are an ordinary, mainstream, humanitarian charity. But their website only tells part of the story. If you look at the posters for fundraising events for their projects in Syria and elsewhere, you will see that they’re closely aligned with the British hate preacher and jihadist network, which operates in the more politically extreme mosques and institutions across the UK. 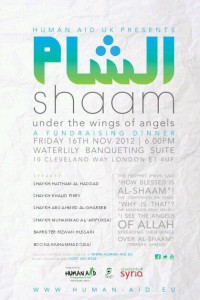 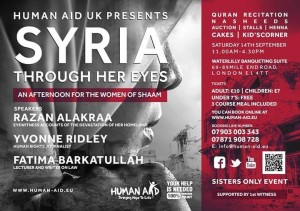 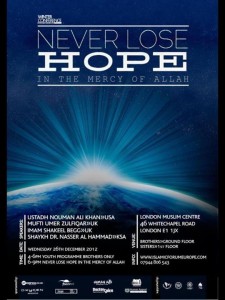 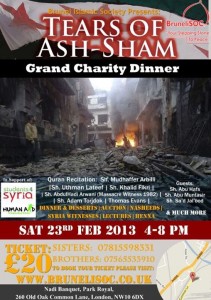 Hadi Arwani of the infamous An Noor mosque: 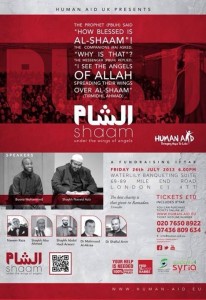 The day started with an official meeting generously hosted by our partner agency, IHH, at the groups International Head Quarters in Istanbul. The meeting consisted of reporting updates and a briefing about what to expect when we fly out to the Syria / Turkey border. Money was also exchanged to purchase the medical aid required to help the Syrian refugees in South Turkey.

İHH is the organisation which chartered the Mavi Marmara. It has also been accused by the Free Syrian Army of gun running to the Syrian Muslim Brotherhood:

There is evidence to suggest that IHH, the Islamic charity that helped organise the 2010 flotilla to Gaza, has been involved in gun-running to Syria on behalf of the Muslim Brotherhood.

Free Syrian Army commanders have told The Times that a boat containing weapons that docked in Syria this week was registered to members of the IHH, which has ties to the Muslim Brotherhood.

Samar Srewel, an FSA activist who had helped to organise the consignment, told The Times: “It was clear from that second what was happening. The Muslim Brotherhood, through its ties in Turkey, was seizing control of this ship and the cargo. This is what they do. They buy influence with their money and guns.” 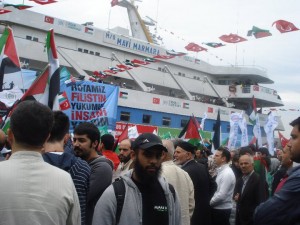 Dr Abbas Khan went out to Syria to treat the sick and injured, the vast majority of whom are civilian non-combatants. So, in that sense, the nature of Human Aid it is irrelevant to the judgement of his actions. To go to a war zone to alleviate suffering is a heroic thing to do.

However, the nature of the organisation which sent Dr Abbas Khan may have had a crucial impact upon his fate. If I can find out, by conducting a simple search, that Human Aid teams up with pro-jihad preachers in its fundraisers in the UK, and partners with the Muslim Brotherhood, gun running İHH in Syria, then so can Assad.

Any doctor, working for any organisation – the UNHCR, the Red Crescent, Oxfam – risks being detained or killed in Syria: by accident, Assad or Al Qaeda. But what steps does an organisation like Human Aid, whose associated preachers are obsessed with “martyrdom” and the “green birds of paradise” put in place to ensure the safety of their volunteers? How does it compare with the processes implemented by non-Islamist organisations? And how much more likely are you to be targeted by Assad when working for Human Aid, as opposed to the Red Crescent?

The family of Dr Abbas Khan are angry that the Government did not do more to secure his freedom, earlier:

“And they have treated his case like he’s been some wayward traveller in Dubai being caught drunk, and contravened some trivial law in Syria.

“The fact that this individual was out there helping the humanitarian effort and has been held for 13 months against his will without a charge or a trial or access to a lawyer, and they have offered very little assistance, placated us throughout.”

There is a limit to what the Government could have done, however. Why would Assad be bowed by the entreaties of British diplomats, given that only a few months ago we were proposing to attack Syria militarily? Had Dr Khan travelled to Syria with Oxfam, or any other charity with a broad and non sectarian appeal, there might well have been a widespread public campaign for his relief. Had he travelled with the Red Crescent, the outrage of this prestigious organisation could have been harnessed to assist the man. Were he working with the UNHCR, Ban Ki Moon would have personally intervened.

As things stood, shameful though it is to say, the best plan might well have been to lean on George Galloway to call in a favour from his old mate.