Adel al-Kalbani is a prominent Saudi preacher. He is due to visit the UK on a tour taking in several mosques. You can see the itinerary on the poster below (click to enlarge). 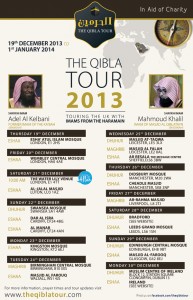 Mr al-Kalbani’s views were starkly presented in an interview with BBC Arabic in 2009. Shia Muslims were picked for denigration:

Interviewer: Do you support those who accuse Shiites of apostasy?

Sheik Adel Al-Kalbani: With regard to the laymen among the Shiites – this is debatable. But their religious scholars – I view them as apostates.

Interviewer: All of them?

Sheik Adel Al-Kalbani: With regard to the religious scholars, yes.

There was more. If you are a Shia Muslim, the best that can be said about you is that you are “misled or ignorant”. In fact, one must be “fanatic” about this issue:

Interviewer: You just accused Shiite religious scholars – not laymen – of apostasy. Some people may ask: If this is not fanaticism, what is?

Sheik Adel Al-Kalbani: This is not fanaticism unless you mean being fanatic about my religion. In such a case, I cannot deny that I am a fanatic. My personal belief is that anyone who is aware of the status of Abu Bakr, yet curses him and draws closer to Allah by hating him, by warning against him, and by cursing him – I cannot call such a person a Muslim. With regard to the laymen, I can accept that they are either misled or ignorant, but someone who knows the status of Abu Bakr, yet accuses him of apostasy and denies that he was a companion of the Prophet – he is undoubtedly an apostate, even if he was a Sunni.

Even in Saudi Arabia, a country accustomed to extremism and horrible rhetoric, al-Kalbani’s remarks prompted rebukes:

The Saudi government has so far been silent about the outcry provoked by Sheikh Kalbani’s statements.

However, last Saturday, Prince Misha’al bin Abdulaziz, Chairman of Allegiance-Pledge Commission and also the King’s half-brother, reiterated that “all Saudis are Muslims.” “No to racism, not sectarianism!” Prince Misha’al said in a statement to Okaz.

“I am stunned by the statements of Sheikh Kalbani who damned Shiite clerics,” Sudeiri said.

More explicitly, Sheikh Osama Khayat, the imam-preacher of the Grand Mosque, warned in his Friday sermon against “any behaviour harmful to the unity of Muslims and against any verbal excess.”

“I advise Muslims not to publish statements, make declarations or give interviews on various media, which may harm Muslims,” Sheikh Osama said in his weekly sermon.

Mr al-Kalbani also targeted Christians and Jews in the BBC interview. Keep them in their subued second class place at the very least, even if the Saudi government won’t follow divine guidance by expelling them from the Arabian peninsula:

Interviewer: Where can Christians [pray]?

Sheik Adel Al-Kalbani: Christians are allowed to pray in their homes. We have no problem with them praying where they live. But for the bells to be sounded in the land of the Prophet Muhammad – that [runs counter] to the Prophet’s guidance. The Prophet’s guidance, by which we act, dictates: “Drive the Jews and the Christians out of the Arabian Peninsula.” Driving them out is undoubtedly the prerogative of the ruler, but they should be allowed to live here only if their presence is essential.

Interviewer: But what you are saying runs counter to the interfaith dialogue, doesn’t it? On what basis does Saudi Arabia engage in interfaith dialogue with them? Is it just dialogue for the sake of dialogue? Isn’t it in order for everybody to get what they are entitled to?

Sheik Adel Al-Kalbani: [The Christian] came as a visitor. He is not a citizen. If he were a citizen… watchamacallit… a Christian citizen – maybe there would be room for debate. Maybe. But in principle, he is a visitor, a guest, who stays for some time, and then leaves. He knew these were the rules before he came here. No visitor to a country can demand that it change its rules.

How would Mr al-Kalbani like it if “the rules” in the UK prohibited Muslims from building mosques, while prominent figures said that ideally Muslims should be “driven from Britain”?

Hilariously, the UK tour organisers have placed this statement on their website:

The Qibla Tour encourage constructive engagement in society and a rejection of extremism in all its forms. We unequivocally reject all terrorism and seek to develop good and lasting community relations through positive engagement.