In recent times the Charity Commission has acquired a taste for “get tough” rhetoric.

Another example was published just today. A new report, the Commission assures us, “shows that the Commission is getting tougher on dealing with non compliance and abuse in charities”. You can read the full report here.

The report includes this “case study”:

About the charity:
The charity has objects to promote education among the residents of an English city, in particular among members of a certain cultural community.

Why we opened our case:
Concerns were raised with us that the charity appeared to be supporting a proscribed terrorist organisation. We needed to get involved to establish exactly was going on and to ensure that the trustees understood and were fulfilling their legal duties.

The outcome:
The charity has removed the offending material supporting the proscribed organisation from its premises. We continue to monitor the charity to make sure its trustees are implementing the changes we instructed them to make.

Er, what about a trustee of a charity appearing in person alongside the leader of a terrorist group? Here’s Essam Mustafa of Interpal with Hamas leader Ismail Haniyeh in Gaza just last month. 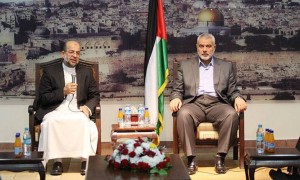 Here is a video.

The “armed wing” of Hamas hailed the convoy on its website.

This is but one of many solidarity visits to Hamas by several Interpal trustees and employees over many years.

Interpal is in fact the core of the Hamas network in the UK.

But the Charity Commission has not stopped Interpal and it appears that it never will.

This is because the Commission is the weakest link of the UK counter-terrorism chain. Its rhetoric is worthless and it is plainly not fit for purpose.