Cross-posted from Roland Dodds at But, I Am A Liberal

The newest PISA scores have been released, and surprise, the US and Britain are trailing most of their Asian and European counterparts in both reading and mathematics. When these scores are released every three years, the same regrettable headlines are brought to head and we are reminded that our education systems sputter along the path of mediocrity. For the last two decades, this meme sat perfectly with the rise of China and Korea economically and the perceived faltering of Western dominance on the world stage, and thus produced countless reforms that were meant to put our students back in a competitive advantage.

Yet, with the growth of the charter school movement, merit pay, and rigorous testing protocols, American students have been stuck right about where they were 20 years ago. There is a reason for this, but it is rarely addressed in the media when education policy is discussed.

That central variable is poverty.

I can see many eyes rolling already. “Yet another excuse for why we can’t compete internationally from some lefty bleeding heart” is likely already filling the comments section below by incensed detractors. Some of the criticisms made of our current education model are sound: training qualified teachers and firing the bad ones while increasing the rigor of the curriculum should be paramount to reformers of all stripes. Nor am I opposed to testing as a tool to measure student and school success. There is a lot we can learn from the highest performing PISA states, and my years teaching in Korea have given me a window into just why many Asian countries excel in this regard. However, if we are to use assessment tools like PISA to make broad judgments about our education systems, we need to look closely at what those results truly reflect.

Let’s deal with the most glaring headline garnered form recent PISA data: Chinese students are doing far better than their American and British counterparts. David Stout was quick to remind people that China was the only nation to be represented by a single city, and not their entire populace. He argues:

Shanghainese and Hong Kong students are much better educated than those elsewhere in China. Slate quoted the Brookings Institution’s Tom Loveless as saying that “About 84 percent of Shanghai high school graduates go to college, compared to 24 percent nationally.” In addition, Loveless points out that affluent Shanghainese parents will spend large sums on extra tuition for the children — paying fees that far exceed what an average worker makes in a year.

China has simply cherry picked their most affluent students for testing, and completely omitted the majority of their people. In fact, Chinese rural education policy is geared almost entirely towards attendance and not testing. Poorer students from the countryside that happen to live in Shanghai, but are designated by the government as “non-residents,” are routinely denied access to the city’s high schools as not to tarnish the city’s PISA ranking.

Finland’s education system has also been championed as a model for the US to follow. Unlike their Asian counterparts, Finland does not have mandatory testing until late into a student’s schooling, practices loose curriculum management, and provides a generous welfare state making it a highly egalitarian state. Concurrently, Finland routinely comes in near the top of the PISA rankings.

However, comparing Finnish test scores to American and British ones is a bit like comparing apples to oranges. Rafael Irizarry at Simply Statistics graphed data provided by the NASSP to show just how well affluent American students compare to their like-minded Finnish counterparts. 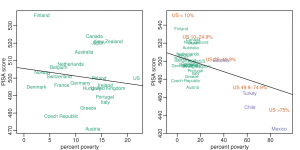 The plot on the left shows PISA scores versus the percent of students living in poverty for several countries. There is a pattern suggesting that higher poverty rates are associated with lower PISA scores. In the plot on the right, US schools are stratified by % poverty (orange points). The regression line is the same. Some countries are added (purple) for comparative purposes (the post does not provide their poverty rates). Note that US school with poverty rates comparable to Finland’s (below 10%) outperform Finland and schools in the 10-24% range aren’t far behind. So why should these schools change what they are doing? Schools with poverty rates above 25% are another story.

This glaring fact is rarely addressed in coverage related to the PISA, and adds much needed perspective to the problems facing our education systems.
None of this excuses bad schools and teachers from responsibility. Yet it does demonstrate that when variables like wealth and access are equal, Americans generally perform as well as their counterparts elsewhere. In both the US and Britain, we face cultural and social problems that have helped exacerbate our educational problems. Conservative critics of our public education systems are right to criticize waste and “feel-good” teaching policies that have only worsened our schools. But poverty matters, and as long as it remains unaddressed by the “school reform” movement, poor students will generally lag behind their more affluent brethren around the globe.