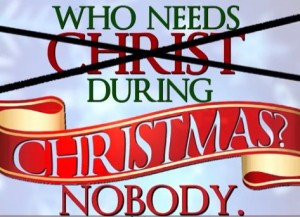 Anti-theist billboards are apparently something of a Christmas tradition in the US. Here are two past examples which challenge those who seek to draw a distinction between religion and myth. 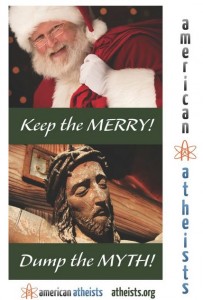 Although a recent poll demonstrated that atheists are more likely to be knowledgeable about religion than the members of any faith group, the second poster’s designers seem to have confused Christmas with Easter.

Atheists should be able to proselytize if they want to, of course, but I can’t say the posters fill me with enthusiasm.  Those aimed at supporting atheists who may feel isolated in their communities seem to have rather more point.

As an atheist – I like myths, including those associated with Christmas, and would find the holiday duller without the art and music inspired by religion.  And, as Chris Stedman, the author of Faitheist, and a humanist Chaplain at Harvard, observes:

I do not think that the number one issue facing atheists in the United States today is Christians celebrating Christmas.