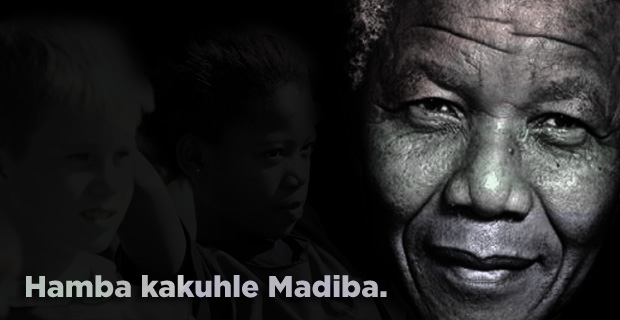 It was with great sadness we learned yesterday of the death of Nelson Mandela, Tata Madiba, the father of our Country, South Africa.

The medium through which some of the most heartfelt and profound tributes to Madiba were expressed is of course music. Even at a time when newspapers, books, films, photographs – and even individual journalists – were banned, it was impossible to ban a tune on the lips of the people, offering a chorus of hope, and ultimately celebration. It is that same music that today helps us celebrate his legacy and comforts us as we contemplate both his loss to the world and a future without his guidance and moral authority.

We had planned to bring you today a holiday season special, but we’ve decided to hold that over until next week. Instead, we have a very special introduction by our friend Toby Tobias after which he will perform a new song with his Ensemble dedicated to Madiba. This is the first public broadcast of this new work. After that we will run an edited repeat of our episode (first aired in June this year) dedicated to the music about Nelson Mandela by South Africans ourselves. But before we hear from Toby Tobias, we take a listen to the African National Congress Choir’s dedication to Nelson Mandela called Usilethela Uxolo, or Nelson Mandela Brings us Peace. Madiba certainly did and he will rest peacefully.

Sleep well Madiba. Thank you for everything. Hamba kakuhle.

In this episode, we feature the music of:

Tune Me What? is podcast and blog by Brett Lock and Leon Lazarus that highlights South African music and artists at home and around the world.