This is the latest spin from the East London Mosque:

Having introduced an extremely tight booking procedure, hosted workshops and training for our trustees, and devoted considerable resources to vetting speakers, we would like to reassure our community and our partners that we take our responsibilities in this arena extremely seriously.

Let’s measure that claim against the record of Fadel Soliman, an Egyptian Islamic activist who will speak at the mosque this evening. 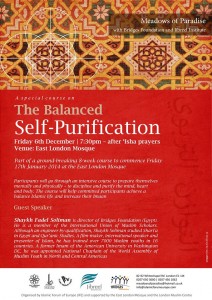 OI: Who are the Sheikhs/Imams who mentored you in the beginning of this path?

You won’t believe it. The one who supported me and helped me most to be an Imam, after Allah, was sheikh Anwar al-Awlaki; the Al-Qaeda man!

Soliman goes on to roll out the lie that Awlaki was wonderful before the nasty Yemenis locked him up. Actually, as readers of this blog know, Awlaki was preaching dangerous messages long ago. They included his speech at the East London Mosque in 2003, when he told Muslims not to help the police to catch terrorists.

The other figures Soliman finds especially inspiring are also notorious:

Beside al-Awlaki, I was much influenced by Sheikh Yusuf al-Qaradawi. I read five books about him and I was tremendously attracted to him. I read his books and I followed his news, so whenever he comes back to Egypt on a vacation from Qatar I go ask him my questions. He always answered my questions and recommended me more books. This happened for several years. I like his courage. He’s a rare brand of Sheikhs who can easily retreat from old fatwas.

I was also very much influenced by the books of Sayyid Qutb and Imam Hassan al-Banna.

Israelis Control America and They Are Nazis
With this background, it is no surprise to see Soliman using language that would be at home on Stormfront:

Here you will see him engaging in rank Holocaust abuse.

American Soldiers in Iraq: Kill Them

Soliman had a straightforward view on American soldiers in Iraq:

Fadel Soliman, a Koran scholar, started out by condemning the 9/11 attacks and calling them un-Islamic. But he had some of his US audience up in arms when he said jihad was obligatory for all Muslims, and said specifically that fighting and killing American soldiers in Iraq is required.

He said this in 2007, when jihadis in Iraq were committing some of the most horrific crimes this century has seen. Keep in mind that British soldiers were still in Iraq then. Presumably they too should have been murdered in Soliman’s book.

Lashing and Chopping
Soliman is very keen on vicious punishments in the name of Islam. Here is one example:

The specified punishment for a person guilty of fornication is 100 lashes, not 90 as you mentioned in your question.

Here you will see him enthusing about chopping off the hands of thieves, which is far superior to the custodial sentences applied in the West.

The Brilliance of Sex Slavery in Islam
Soliman is the kind of man who is so determined to present Islam as perfect and superior that even grotesque perversions must be hailed. Try sex slavery. It’s brilliant, you see, because if a female slave gets pregnant then she is freed. Lovely!

Obviously the mosque’s “vetting” work is just ace, isn’t it.