This is a cross-post by Kellie Strøm 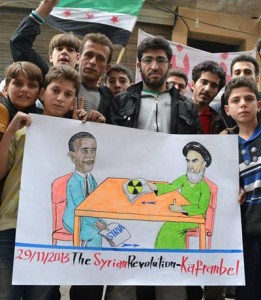 Above: cartoon by protesters in Kafranbel, Syria. They see Obama trading away Syria under the table in order to get his Iran deal. Read more on Kafranbel’s history of protest in Rising Up and Rising Down, Amal Hanano’s October article for Foreign Policy.

A suspicion similar to the one expressed in the above cartoon appears in an article by Politico editor Susan B Glasser, The Price of Smart Power: Will Obama’s nuclear deal with Iran come at the cost of Syrian lives?

At Now Lebanon, Michael Weiss gives his version of this analysis, The Invisible Rider on the Deal: Syria has been ceded to Iran in exchange for a six-month pause on Tehran’s nuclear program.

The core of the analysis is this:

In essence Obama’s strategy seems to seek a cold peace by allowing Iran to consolidate a Tehran Bloc from Lebanon to.. Afghanistan? The eastern limit is not yet clear. What is clear is that while Iran negotiates on its nuclear program, its proxy force Hezbollah, along with other forces armed and trained by Iran, has a relatively free hand to keep Assad in power in Syria.
•
The test of this ‘Tehran Bloc’ policy’s wisdom, on its own terms, is not whether such an arrangement would best serve those having to live under it, but whether such an Iranian empire would be more stable at less cost to the US than any other available option. Reasons to doubt this policy’s wisdom in those terms begin with Syria, but do not end there.

On Syria, one might doubt how ready the regime’s opponents will be to peacefully accept its continuance in part or all of Syria when over 110,000 have been violently killed, over 11,000 of them children. There are over two million Syrian refugees in neighbouring countries (a quarter of them children) and a further million internally displaced people within Syria. It seems likely that even if a settlement were reached allowing the regime to retain power, a large portion of Syria’s population would choose to remain outside the regime’s area of control.

The long term consequences of this level of killing and displacement for regional stability can’t be known in advance, but when one compares the scale of the refugee population to the numbers displaced in the 1948 Arab-Israeli War, 711,000 according to a 1950 UN report, less than a third of the current number of Syrian refugees, then it becomes clear that the consequences could be dire and long-lasting.

Even within its own borders, the Iranian regime maintains power by means of routine torture and execution. It has periodically faced violent resistance from ethnic minorities within Iran, and is likely to again in future.

You can read the rest of Kellie’s post here.