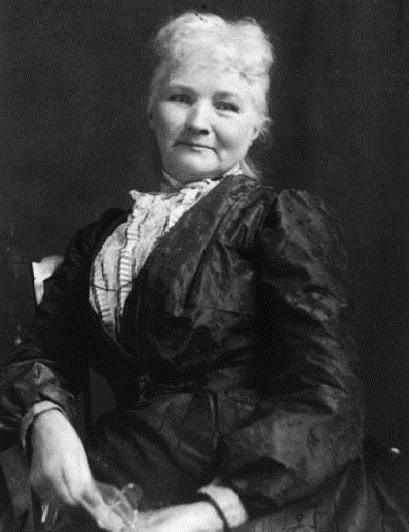 Mary Harris “Mother” Jones, an Irish-born dressmaker and teacher who became a tireless fighter on behalf of mill-working children, coal miners and other struggling workers, died on this date in 1930.

She became known as “the most dangerous woman in America”, a phrase coined by a West Virginia district attorney, Reese Blizzard, in 1902, at her trial for ignoring an injunction banning meetings by striking miners. “There sits the most dangerous woman in America”, announced Blizzard. “She comes into a state where peace and prosperity reign … crooks her finger [and] twenty thousand contented men lay down their tools and walk out.”

Somewhat contrarily, Mother Jones was an opponent of female suffrage, proclaiming, “You don’t need the vote to raise hell!”

After being introduced as a “great humanitarian,” she replied:

“Get it straight, I’m not a humanitarian, I’m a hell-raiser.”

“No matter what your fight, don’t be ladylike! God Almighty made women and the Rockefeller gang of thieves made the ladies.”

“Pray for the dead and fight like hell for the living!”

Mother Jones is buried with her “boys” at the Union Miners’ Cemetery in Mount Olive, Illinois, which I have had the privilege of visiting.

The year after her death, the singing cowboy Gene Autry (who went on to perform my favorite song of early childhood “Rudolph the Red-Nosed Reindeer“) recorded this song in tribute to her: