On the 75th anniversary of Kristallnacht– the brutal and murderous Nazi pogrom against the German Jews, their homes, their synagogues and their businesses– Der Spiegel reports on how foreign diplomats in Germany described the awful events at the time.

Despite the often-truncated form of the reports and the detached language of the diplomats, these are impressive documents with historical value. They attest to the fate of the Jewish orphanage in Esslingen, near Stuttgart, where a mob of Nazi sympathizers drove children out into the streets; of Jews who were forced to march in rows of two through Kehl, in southwestern Germany, and shout “We are traitors to Germany”; and of terrified people hiding in forests near Berlin.

What is also noteworthy about the documents is what they do not contain. In this respect, they point to the failure of the international community and its far-reaching consequences. The diplomats almost unanimously condemned the murders and acts of violence and destructions. The British described the pogrom as “Medieval barbarism,” the Brazilians called it a “disgusting spectacle,” and French diplomats wrote that the “scope of brutality” was only “exceeded by the massacres of the Armenians,” referring to the Turkish genocide of 1915-1916.

Nevertheless, no country broke off diplomatic relations with Berlin or imposed sanctions, and only Washington recalled its ambassador. Most of all, however, the borders of almost all countries remained largely closed for the roughly 400,000 Jewish Germans.

In fact, as I posted in 2010, one of the few demonstrations against the atrocity was led by Australian aboriginal and trade union leader William Cooper.

I’m currently reading Lynne Olson’s Those Angry Days, about the fierce struggle in America over US support for Britain against the Nazis before America’s entry into the war at the end of 1941. It includes this startling photograph of the Japanese and German military attachés with American General Walter Short observing US Army war maneuvers in upstate New York in August 1939: nine months after Kristallnacht and less than a month before the German invasion of Poland (there was a lot of pro-German sentiment in the upper ranks of the US military at the time): 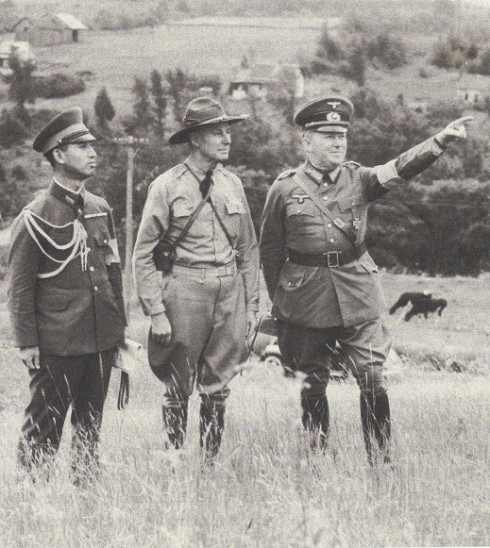 Update: In contrast to the shock and horror expressed by some foreign diplomats on Kristallnacht, the report by Irish envoy Charles Bewley was sympathetic to the Nazis and blatantly antisemitic.