Ismail Menk is a somewhat popular preacher from Zimbabwe. He certainly has fans in the UK. Among them one finds the Tayyibun Institute, an East London group with a record of promoting vicious hate preachers. This includes a notably nasty online “teacher” roster.

Tayyibun is touring Menk around the UK this month. The venues nclude the London Muslim Centre of the East London Mosque on 15 November. 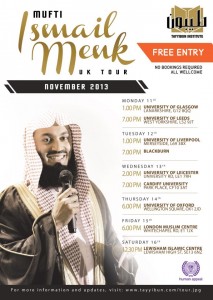 Have a look at Ismail Menk on homosexuals:

Salman Farsi, from the mosque, said booking procedures had been tightened since last year.

“Any speaker who is believed to have said something homophobic will not be allowed to use our premises, whether that is us organising an event or someone else. As for the the condemnation of homophobia, our director has gone on the record on this.”

Menk is no stranger to the East London Mosque. In fact, it invited him to deliver the Friday sermon just a month ago.

While we’re on the subject of homophobic hate preachers at the East London Mosque, let’s not forget the wonderful Mr Aseem Al Hakeem, who had the honour of delivering the Friday sermon on 21st June 2013.