A terror suspect who has gone missing after changing into a burka at a mosque is being hunted by police.

Mohammed Ahmed Mohamed, 27, who was subject to an order restricting his movements, was last seen on Friday leaving the site in Acton, west London.

CCTV images showed him leaving with his face totally covered.

Mr Mohamed arrived at the An-Noor Masjid and Community Centre, in Church Road, Acton, wearing a jacket and trousers at approximately 10:00 GMT on Friday, and was seen inside at 15:15 GMT.

CCTV images issued by Scotland Yard showed him arriving and then leaving the mosque in the burka.

When the TPims order was obtained, Mr Mohamed was said to have received terrorist training in Somalia and fought on the front line in support of al-Shabab.

Court documents also say he supported a UK-based network supporting terrorist-related activity in Somalia and had been involved in attack planning against Western interests in east Africa.

Here are the photos: 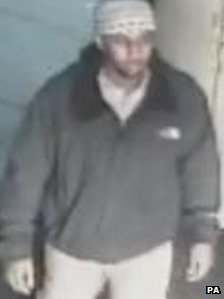 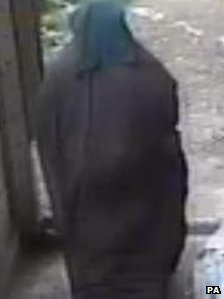 The An Noor mosque has long been associated with political and religious extremism.

One of its directors is Daud Abdullah, who has served as the Deputy Director General of the Muslim Council of Britain, and who now runs the Hamas advocacy organisation, Middle East Monitor. He was famously a signatory of the Istanbul Declaration, which threatened attacks on Jewish communities worldwide and potentially against the Royal Navy for enforcing a proposed arms blockade.

The Mosque also hosted the blood libel promoting hate preacher, Raed Salah, who has claimed that Jews feast on the blood of non-Jewish children in their Passover matzohs. Here he is pictured with Hadi Arwani, who I believe is the Mosque’s Imam: 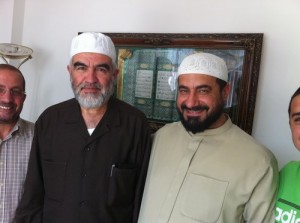 The mosque has also hosted the very worst hate preachers in Britain – and a number now banned from entering Britain – including Abdullah Hakim Quick, Hussein Yee, Murtaza Khan, Shakeel Begg, Haitham Haddad, Khalid Yasin, and Assim al-Hakeem and Uthman Lateef, who had a close connection with this institution. Read the archives of Harry’s Place for information on these and other hate preachers associated with An Noor.

It also held an event to support the convicted Al Qaeda terrorist, Aafia Siddiqui. This is what happened at that event:

The son of hook-handed cleric Abu Hamza has spoken out in support of holy war at a London mosque and publicly backed a suspected al-Qaeda terrorist who attempted to murder American troops in Afghanistan.

Uthman Mustafa Kamal is the second-youngest son of Britain’s most notorious preacher-of-hate, who was jailed for inciting violence at Finsbury Park mosque and is currently facing 11 terror charges in the United States.

In recent years, Mr Kamal has himself built up a following at the An-Noor mosque in Acton. Videos seen by the Evening Standard show the young man praying for “mujahids” – or holy warriors – and calling on his audience to “help” them “destroy their enemies”.

Farouq Malik, the head of the An-Noor mosque, claimed Mr Kamal was referring to Muslims fighting “occupying forces” in overseas lands, such as Palestine, Iraq and Afghanistan.

However, he admitted this was not made clear and the sermon could be used by London-based Islamic extremists to foment hatred in the capital.

In another video posted on the mosque’s official YouTube channel, Mr Kamal quotes the Koran as he called on “believers” to “sell the life of this world for the Hereafter (and) fight in the Cause of Allah”.

He said: “O God! Unbind Aafia’s chains of imprisonment…Pardon her, forgive her, have mercy on her, give her safety…Be with her…Plot on her behalf…Dignify her…Safeguard her and her children, her sons…Help her against her enemies, who are your enemies and enemies of Islam.”

On Mr Kamal’s prayer for Ms Siddiqui, Mr Malik said: “What I know is that she is being held and she has not been convicted of anything. That is what I know. There are things that they say she is guilty of that have never been proven. I think she has been made a scapegoat…it is a travesty.

None of this prevented the American Embassy and the British Home Office from sending a representative to its “Question Time” event, last month. The event was chaired by Ajmal Masroor, a preacher and an activist in the Liberal Democrats, who claims that Bangladesh’s government is engaged in a “genocide of Muslims“.