Almost exactly one year ago, we reported that Naz Kahn, the Women’s Officer of George Galloway’s RESPECT Coalition in Bradford, was posting pro-Nazi material on her Facebook page. RESPECT issued a mealy mouthed response: but as far as we can tell, refused to dismiss Naz Kahn from her post.

Since then, RESPECT Bradford has collapsed, and its councillors have deserted it. Again, as far as we can tell, Naz Kahn is still the Women’s Officer of the local party. Certainly, there has been no announcement that she has been expelled from the party. She is one of the most prominent posters on the Respect Your Community Facebook page, which also features postings by Chris Chilvers, the  National Secretary of RESPECT:

She now calls herself Axa Kahn (Smiler). However, her Facebook address confirms that Naz and Axa are the same person (https://www.facebook.com/naz.kahn): 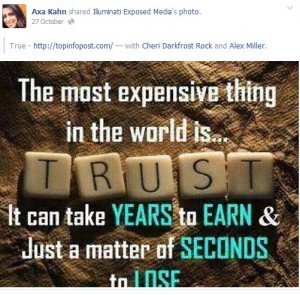 Naz Kahn has now embarked on a new episode of Holocaust denial. A contact sends me the following link to an article from The Ugly Truth Facebook page, which Naz Kahn has liked: 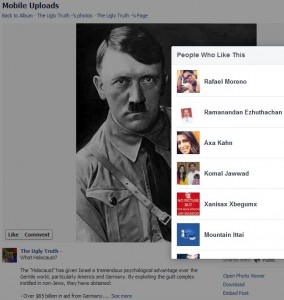 The “Holocaust” has given Israel a tremendous psychological advantage over the Gentile world, particularly America and Germany. By exploiting the guilt complex instilled in non-Jews, they have obtained:

– Over $65 billion in aid from Germany.
– Over $55 billion in aid from America. Israel, a prosperous country, receives $3.2 billion, (or $8 million a day) in foreign aid – more than any other country.
– The 45,000 Jewish immigrants from Russia have the highest annual quota after Mexico. They enter as “refugees” without having to prove persecution! As “refugees” they are automatically entitled to full welfare benefits not subject to welfare reform cuts.
– Nonstop holocaust brainwashing in schools, TV, movies and books has placed Israel and organized Jewry above criticism!

Immediately after World War II, Allied authorities declared that “Jews had been gassed” in all German concentration camps. It later discovered that the many bodies photographed in the camps died during the waning days of the war – from typhus, cold and starvation. Simon Wiesenthal, of the “Holocaust Center” in Los Angeles, stated in Books and Bookmen, April 1975, page 5, “No gassing took place in any camp on German soil.” The Jew L.P. Beria headed the Soviet NKVD secret police from 1938 to 1953. In 1945, he announced that they had discovered a “holocaust” of six million Jews. This conveniently occurred only in camps in Poland! Beria would not allow any outside investigators to examine these sites. The Jewish-owned New York Times reported in 1945 that Soviet Russia supplied the figure of four million Jews having been put to death, “in the gas chambers of Auschwitz.” However, in July of 1990, the Polish government reduced this figure to 1.1 million and it was accepted by Jewish groups. Despite this evidence, the “official figure” of six million dead was not lowered to three million!

(It should also be noted that Elizabeth Dole, president of the American Red Cross, and wife of former Sen. Bob Dole, revealed that the official death records from Auschwitz had been uncovered in the Soviet Archives. It listed 70,000 deaths from all causes.)

How many Jews actually died?

Naz Kahn has also shared a post from The Ugly Truth on the Respect Your Community Facebook page: 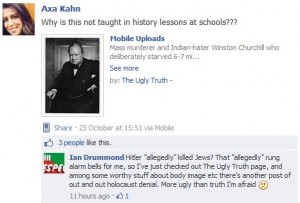 You’ll note that the poster who objects to Naz Kahn’s Holocaust denial is Ian Drummond, who is on the National Council of RESPECT.

So, will Naz Kahn now be expelled from RESPECT and – if she is still in post – removed from her position as Women’s Officer?