Jalal ibn Saeed is an American Islamist preacher who lives in Britain. Readers may remember he is a supporter of the Taliban.

He’s also a fan of the racist David Duke, a former “Grand Wizard” of the KKK. 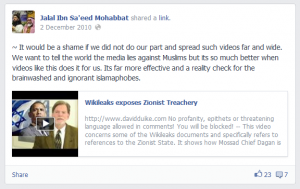 With that background, the list of speakers ibn Saeed’s “Al Fitrah” outfit plan to gather at The Dorchester hotel in London next month is not in the least surprising. Here they are, as named on Facebook:

Sh Salim al Amry, “These walls have witnessed so much jahiliyah [ignorance of the divine], tonight they witnessed Allah being worshipped. May Allah accept it from us.”

This is an assembly of death cultists. In this post, let’s look at the record of four of the speakers on just one ghastly topic – why homosexuals should be executed.

Bilal Philips
Bilal Philips is a Canadian preacher. He has been banned from the UK. This is why he will only appear at the event by video link. For Philips, homosexuality is a simple issue:

In Islamic law the punishment for homosexuality is no different from the punishment for adultery and fornication. It could be death. It’s looked at as a deviation, just as if somebody is involved in bestiality, sexual relations with animals. Death! This is a deviation. Adultery is death. So it’s not any special punishment, it is a punishment for deviant behaviour which threatens the family structure of a society.

In this video you can see him tittering about it all in the context of being banned from Germany. He’s also banned from Australia, Kenya and the USA.

You can read more about Philips’s record here.

Zakir Naik
Zakir Naik is an Indian preacher. He too has been banned from the UK. There’s no room for doubt about his view:

Yusuf Estes
Estes is an American preacher. In this video you can see him call homosexuality “from the devil” and a “criminal act” in Islam. On this website he goes further, recommending this ruling.

In order to maintain the purity of the Muslim society, most Muslim scholars have ruled that the punishment for this act should be the same as for zina (i.e. one hundred whiplashes for the man who has never married, and death by stoning for the married man). Some have even ruled that it should be death for both partners, because the Prophet, sallallahu alayhe wa sallam, said: “Kill the doer and the one to whom it was done.” (Related by Al-Bayhaqi).

Khalid Khan
Khalid Khan is a London-based preacher and Islam Channel presenter. Among the pearls of wisdom offered on his website is this from a Saudi tome on Islamic jurisprudence:

The Companions of the Prophet have not differed in killing sodomites, and some of them are of the opinion that a sodomite is to be raised to the top of the highest building in town and thrown from there, followed by stones thrown at him.

Al Fitrah Teachers
You’ll find more vicious haters among the teachers promoted by Jalal ibn Saeed’s Al Fitrah. They include Murtaza Khan, who wants homosexuals thrown off mountains and stoned, and Khalid Yasin, who says bluntly that the penalty for homosexuality is death.

What a lovely bunch!