Following lengthy reconciliation discussions with the Board of Deputies, Stephen Sizer has conceded to having three proof-readers check whether his social media posts are antisemitic or not.

Sizer is claiming this as a victory of sorts, insisting that the Diocese’s judgement ultimately vindicates  proves he is not antisemitic. However – crucially – Sizer has expressed remorse and conceded to some sort of vetting process, as his bishop evidently no longer trusts Sizer’s judgement on Jewish matters.

His belated “regret” (not an apology) is, of course, welcome, but smacks of reluctance more than remorse.

Perhaps now he’ll refrain from promoting the bile and lies lurking in the darkest corners of the web and finally start to quietly do his bit for the betterment of society.

But this is Stephen Sizer’s Facebook page today tells a different story.

There is an American Holocaust denier named Joachim Martillo, who blames Jews for the financial crisis. Martillo has previously written:

A more recent example is the Auschwitz convent controversy, which proved to be the model for all later attempts of the organized American Jewish community to control discourse about the Holocaust and genocide in general with an attempt to prevent the construction of a convent at Auschwitz as part of the memorialization of martyred Poles. The resulting increase in Judeophobic feeling among ethnic Poles was predictable as was the transformation of Radio Maria into an important Jew-hostile phenomenon of Polish Catholicism.

Martillo has posted a string of posts in support of Sizer, and specifically against the Board of Deputies. His latest comment on Sizer’s Facebook wall reads as follows:

Stephen Sizer seems to have been subjected to tactics associated with the “mob and smear” strategy.

The Famous Viennese journalist Karl Kraus saw in Benedikt’s Neue Freie Presse the embodiment of unprincipled commercialism, the unscrupulous efforts to manipulate popular opinion, that so troubled many public-spirited observers. It says much about the Austrian scene that Kraus, himself Jewish, was one of the most persistent critics of Jews in Austria. Revealingly, his own style — intransigent, mocking, sophisticated, and supremely witty — was precisely the kind of style that anti-Semites considered typically Jewish. He would at any rate have considered the charge that hostility to Jews was based entirely on Gentile fantasy either ludicrous or incomprehensible. As far as he was concerned, Viennese anti-Semitism was without a doubt the result of justified resentment by Gentiles concerning the outrageous antics of Jewish journalists.


He was by no means alone in that opinion. Friedrich Austerlitz [Jewish socialist writer] further asserted that the Jewish-owned liberal press was concerned to serve Jewish interests, to cover up misdeeds by Jewish capitalists, and to shower with abuse anyone who criticized Jews. Jewish press supremacy, he later observed, “was a conspiracy in favor of the Jews; the legend of the solidarity of all members of the people of Israel was at that time a reality.” Austerlitz granted that in the earlier part of the century, when Jews had been oppressed, criticism of their “eccentricities” was inappropriate, but by the latter half of the nineteenth century, when they dominated so much of public life in Austria and when their activities were so often corrupt, criticism was not only appropriate but the duty of all honest observers, Jews and non-Jews.

Here is a photo capture: 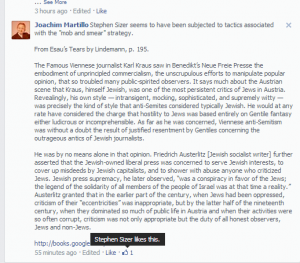 The book Martillo links to in the comment, Esau’s Tears, seeks to link antisemitism with ‘Jewish behaviour’ and ‘the nature of real Jews’ [page 532].

A Holocaust-denier, friends with Sizer, links to a book justifying antisemitism – and Sizer likes the comment.

I think that says it all.