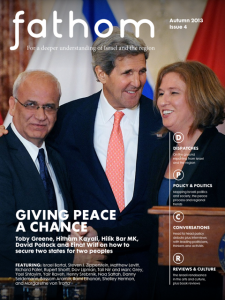 ‘Peace comes dropping slowly,’ wrote the Irish poet William Butler Yeats. And yet, as the people who share the island of Ireland showed us, it does come. The conditions for success in the new round of peace talks between Israel and the Palestinian Authority are the concern of several of Fathom’s contributors.

Toby Greene and Hitham Kayali, an Israeli and Palestinian, offer contrasting perspectives on the failure thus far of the Oslo Process, and a common vision of ‘two states for two peoples’ as the basis to end the conflict.

Einat Wilf and David Pollock examine two obstacles to the ‘two states for two peoples’ vision: respectively, the role of the United Nations Works and Relief Agency (UNWRA) in inflating the scale of the Palestinian ‘refugee issue and the role of incitement in official Palestinian Authority media.

Another oblique reflection on the prospects for peace is the fascinating dispatch from the South Hebron hills sent to us by Richard Pater. He offers not only a vivid description of a routine IDF patrol but a pained strategic reflection on the future of the Territories.

For users of the website or app, we offer two podcasts showcasing Israeli voices of peace, Jewish and Arab. Danny Seidemann on how it is still possible to bridge the differences and secure the city’s future, and Bassam Aramin, Rami Elhanan and Shelley Hermon on the making of the award-winning documentary Within the Eye of the Storm.

The region is stuffed full of authoritarian regional actors that seek the role of spoiler when it comes to Israeli-Palestinian peace. Hezbollah, one of the most potent spoilers, is the subject of Matthew Levitt‘s powerful analysis; the Lebanese Shia Islamist terror group being read here as a criminal network. Rupert Shortt, the author of a careful but politically urgent new book, Christianophobia: A Faith Under Attack is interviewed by Fathom editor Alan Johnson.

The mending of social divisions within Israel occupies several writers in this issue. Each pays testimony the powerful sources of democratic renewal in Israeli society. Rabbi Dov Lipman MK looks at the tension between secular and ultra-Orthodox Israelis through the spectacles of a ‘modern haredi’. Tali Nir and Marc Grey from the Association for Civil Rights in Israel (ACRI) argue that social and economic rights should be enshrined in a new quasi-constitutional ‘Basic Law: Social Rights.’ Yael Shtayim, an artist and activist, reports from Tel Aviv about the exciting new tools that citizens are using to advance human rights in Israel. Noa Sattah writes on the struggle of Women of the Wall to pray there and so extend Jewish pluralism in Israel.

Our reviews and culture section carries reflections on the historiography and cultural history of Zionism and anti-Zionism. Steven J. Zipperstein reviews Avi Shilon’s detailed, steadily empathetic biography of Menachem Begin. In an important response to the influential intellectual project of Shlomo Sand, Israel Bartal, Dean of Faculty of Humanities at The Hebrew University of Jerusalem, sharply critiques the propagandist qualities of Sand’s books, while pointing out that, once their rhetorical gloss is put aside, they rarely stray from classical Zionist historiography. Henry Srebrnik reviews Joshua M. Karlip’s history of ‘the rise and fall of an ideal: an autonomous Jewish nation in Europe.’

Andrei Markovits celebrates the life of Hank Greenberg, an exceptional Jewish baseball player for the Detroit Tigers. Yair Raveh continues to map Israel’s cultural renaissance, this time opening up for readers ‘the most surprising, and thrilling, of all trends to have ever emerged in Israeli cinema: the rise of the horror film.’ Finally, we interview the acclaimed German director Margarethe von Trotta about her controversial new film Hannah Arendt.

Fathom marries the authority of the old-school journal with the accessibility provided by modern technology: Fathom is available online at fathomjournal.org and as a free app for the iPad and iPhone and, for the first time, Android.