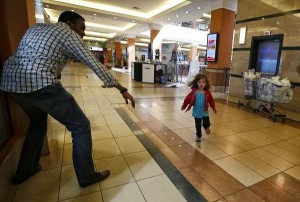 This is one of the most moving and viral images which came out of the terrorist attack on the Westgate Mall in Nairobi.

Last night we learned the identity of the man who the little girl is running towards and all of Kenya is hailing him as a hero.

His name is Abdul Haji and he is the son of Mohamed Yusuf Haji, a Somali politician based in Kenya who has served as Minister of Defence and Minister of Internal Security and Provincial Affairs.

In a riveting thirty minute interview on Kenyan prime time news Haji relates how he rescued dozens of people (video after the jump).

He received a text from his brother in the Mall reporting gunfire and went there to find him. As he arrived he saw many dead people including children and the elderly. He then linked up with a multi-racial, multi-faith group and spent around four hours trying to rescue as many as they could before he eventually tracked down his brother.

He relates the story of the photo. They noticed a woman and a number of children hiding underneath a promotional table in a spot right in the crossfire between themselves and a terrorist. He asked her to ask the eldest child to run towards them.

She ran towards men with guns. She did not cry. She remained calm throughout.

Haji says that even after the picture went viral he was reluctant to speak.

If such a girl can be so brave there is no reason we cannot.

Asked later why he did what he did and whether he is a hero he says:

I’m not sure what motivated me, I was in the moment, I was angered. I was, for want of a better word, pissed off with what had happened.

I am not a hero. I did what any other Kenyan would have done, to save anyone regardless of nationality, religion or creed. We’re definitely not heroes.

He wanted to protect his privacy, but many told him he was a hero and encouraged him to come forward because Somali-Kenyans were being criticised, as were Muslims. He says he initially feared that his brother was not safe because someone was after him as the son of a prominent Somali-Kenyan. He describes the terrorists as abnormal and that they cannot be seen as representing Muslims.

It has almost become a cliche to say that Islam is the religion of peace, but it is true. It says that if you save one life it is like you have saved the whole of humanity.

They call themselves Jihadis but one of the paramount rules of engagement in jihad is that you cannot kill a woman, a child, the elderly. So where are the getting their doctrine? Why are the trying to drive a wedge? It’s physiological warfare, they’re trying to divide Kenyans but I witnessed that they killed Muslims there. 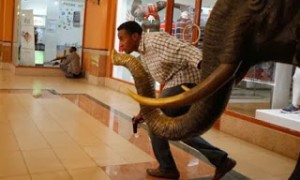 Early reports that the terrorists were saying they would protect Muslims and were asking people to name Mohammed’s mother have become a theme of reporting the attack. This despite photos on Sunday of a Muslim burial.

In a blog post titled ‘The Folly Of ‘Otherness’ – What Al-Shabaab Revealed About Us‘ Charles “Mase” Onyango-Obbo from The Nation points out that: “reality challenged the media stereotype of the Westgate attack”:

There was an awkward wrinkle – Muslims too were among the dead. That was not supposed to happen, you know, how come “Islamist terrorists” were killing other Muslims? One of the survivors said he watched in horror when two terrorists asked some women to cite verses of the Quran to prove they were Muslim. They did…then the men shot them at point blank range. Some terrified people who were lying on the ground screamed; “why did you shoot them?”

One of the gunmen replied, “because they were not wearing the hijab”. So, it seems, misogyny and patriarchy trumped religion. 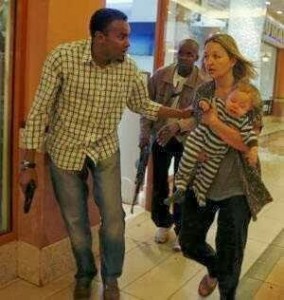 Divisions between Africans and Westeners, the poor and the middle class, between this and that tribe, all dissolved in the reality of what actually happened. Says Onyango-Obbo:

Debased “otherness” enables us to ignore the pain of others and sleep soundly at night; to discriminate against people who are different without having to trouble our consciences; to persecute those who are not our relatives, fellow citizens, not of our religion, or social station without being afflicted by a sense of injustice. This type of “otherness” is anaesthesia against having to be humane…

So perhaps it is time to pause and reflect. The outcome of the Westgate terror attack seemed to tell that not all contests between those who have and those who don’t are a Lenist class war. Not every contest between cultures, religions, or races is a battle for conquest and domination. That they are well-meaning negotiations for space, for respect, for a little share of the pie, for some of the air, for a bit of the limelight, not a tango of death.

NTV’s interview with Abdul Haji after the jump: