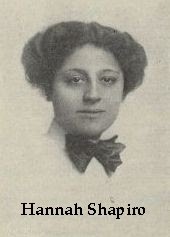 Today marks the 103rd anniversary of the Chicago Garment Workers’ Strike of 1910.

On September 22, 1910, Hannah [a.k.a. “Annie”] Shapiro (later Glick), a seventeen-year-old Jewish immigrant born at Nehzin, in the Ukraine, initiated the workers’ walkout in shop 5 of the clothing firm of Hart, Schaffner & Marx, 1922 South Halsted Street, Chicago. That Thursday,after returning from vacation for the Jewish New Year, Shapiro complained to her foreman about a cut in the piecework rate from 4 cents to 3 & 3/4 cents for seaming a pair of pants. He replied that nothing could be done; Shapiro returned to her co-workers and reported what the foreman had said. She returned the following Friday and Monday to talk to the management– again without success. Next, under Glick’s leadership, workers from shop 5 walked out. By Wednesday, workers in other company shops refused to do the work of shop 5 and, by the end of the week, workers in seven out of ten Hart, Schaffner & Marx shops were out. A month later, 40,000 Chicago garment workers were on strike. 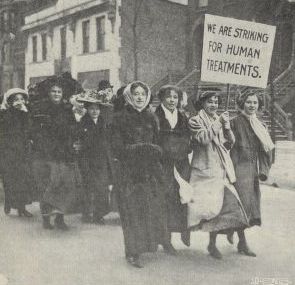 Like earlier needle-trades strikes in New York, Cleveland, and Philadelphia, and the subsequent one in Lawrence, Massachusetts, the Chicago strike was notable for being cross-ethnic. Workers and organizers spoke Yiddish, Czech, Polish, Italian, Lithuanian, and English. The Chicago strike, also like the others, was also notable for being led by women; indeed, the men who controlled the [United Garment Workers union] refused to take seriously the teenage girls who organized the strike at the beginning. But despite their youth, the women were veteran workers and often experienced [Women’s Trade Union League] organizers.

After a bitter four-month struggle, the strike ended with agreement on a union contract negotiated by the great Jewish labor leader and socialist Sidney Hillman.