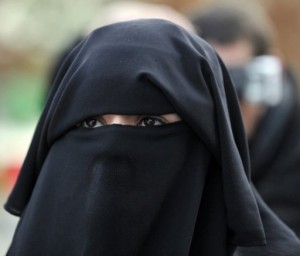 1. “The State Should Not Tell Women How To Dress”
The verbatim roboticism with which this argument is repeated speaks to its effectiveness as a talking point. It relies for that effectiveness, however, on a rhetorical trick designed to make a ban sound like the very thing it is intended to combat.

The substantive point being made – that the State has no business interfering in such decisions in any way – is a perfectly legitimate one. Its formulation is misleading. “Telling women how to dress” is prescriptive. In other words, the State demands, as it does in theocracies like Iran and Saudi Arabia, that “you must wear this”. A ban on the niqab in public places, however, is proscriptive, and makes only one requirement: that people do not cover their faces.

A niqab ban would not permit the State any comment on how they dress otherwise. Needless to say, those opposed to totalitarian codes of prescriptive dress have a far greater quarrel with Islamist authority than with a State law intended to circumscribe that authority.

…
3. The Freedom To Do As You Are Told
But over at the ever-indulgent Independent, space was cleared for Sahar al Faifi to do just that, as she upended the English language by claiming that Islam is a “liberation from worshipping anything but the one God”. She went on:

I am a proud Welsh and British citizen, a molecular geneticist by profession and an activist in my spare time . . . I wear the niqab as a personal act of worship, and I deeply believe that it brings me closer to God, the Creator.  I find the niqab liberating and dignifying; it gives me a sense of strength.

Coercion does not necessitate physical imprisonment, and religious authority exerts a particularly pernicious hold over those taught from birth to accept it without question. Al Faifi adopted the niqab at the age of 14, against the advice of her parents. So then where, one is entitled to ask, did she learn that such a self-denying act was even required of her by her God? There is certainly no mention of it in the Qur’an. A few paragraphs later she says this:

Islam is not a monolithic religion and therefore Islamic scholars may differ in their jurisprudence but most agree that in particular cases, Muslim women are allowed to take off their veils – though each case should be dealt with individually. Muslim women like myself do not find this a problem.

So accustomed is al Faifi to obeying the dictates of men in robes, and so completely has she accepted this as a necessary and inevitable fact of life, she doesn’t realise that her use of the word “allowed” here holes her claim to free choice below the waterline.