Anti-union types may have believed that the Polish trade union movement– having fulfilled its historic role in sparking the end of Communist rule in Eastern Europe– had dutifully faded from the scene. 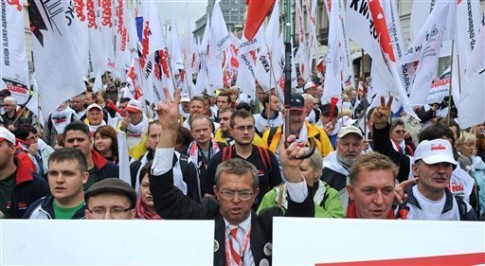 Around 100,000 angry Polish trade unionists marched through Warsaw Sept. 14 in the finale of a four-day protest against the unpopular and increasingly fragile centre-right government.

The protest reflects widespread public gloom over a sharp economic slowdown in Poland, which has sent the coalition’s popularity plunging to its lowest level since Prime Minister Donald Tusk took office in 2007.

“We want the departure of Donald Tusk. This is the only way to change social policy in Poland,” Solidarity Spokesman Marek Lewandowski told AFP.

“We can no longer tolerate policies leading to misery and poverty,” OPZZ union head Jan Guz said, calling the protest a “final alarm bell” before a possible general strike.

Union members, including coal miners, railway, steel, health and shipyard workers – the latter from Solidarity’s cradle at the historic Gdansk shipyard – descended on Warsaw from across the country.

Clad in hard hats and brandishing union flags they blared sirens, beat drums, blew whistles and halted traffic as they marched through the city centre.
…..

The unions have the support of a majority of Poles, according to an opinion poll by MillwardBrown on Sept. 10: 59 percent of respondents said they backed demonstrations. Anger is centered on recent changes in labour and pension policy.

“We want pensions at the age of 65 as before and not at the age of 67 as Tusk’s reform would have it. We want better social policy and guarantees for employees,” Lewandowski said.

“We want a government that will take care of our interests, so we can live in dignity,” Solidarity protester Ryszard Czyska, told AFP.