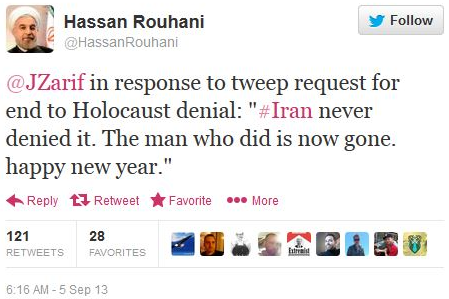 Make of it what you will.

Update: This is interesting. Iran’s foreign minister responds to a tweet from Christine Pelosi (daughter of House of Representatives Democratic leader Nancy Pelosi).

@sfpelosi Iran never denied it. The man who was perceived to be denying it is now gone. Happy New Year.

Further update: As best I can determine, Foreign Minister Javad Zarif’s tweet originally said (clearly referring to former president Ahmadinejad) “The man who did [deny the Holocaust] is now gone,” then was modified to “The man who was perceived to be denying it is now gone.” Rouhani tweeted a quote of the original, then deleted it.

Additional update: And now Iran’s Fars News Agency is denying that the tweets attributed to Rouhani (including the Rosh Hashanah greeting to Jews) are coming from Rouhani. If true, I suppose that makes the Zarif tweets questionable too.

Robin Wright, a journalist and foreign policy analyst at the U.S. Institute of Peace and the Woodrow Wilson Institute, tells NPR’s All Things Considered that both Twitter accounts in question are in fact authentic.

Asked by ATC host Melissa Block whether we know that the account attributed to Zarif is real, she says “we do, because I asked him myself.”

Wright says she’s known Zarif for some two decades and she contacted him via email and confirmed the authenticity of the exchange with Pelosi.

As for Rouhani’s account, Wright says has identified it as one of two real accounts used by the president’s office.