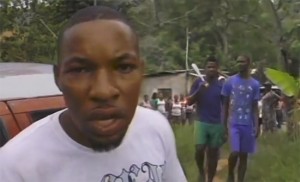 It’s Russia, Russia, Russia when it comes to ‘foreign gay news’ these days. But it’s a much bigger and badder gay world out there.

Although the video footage of gays being tormented by Russian Nazis is mainstream news, worse footage from Jamaica is failing to attract anything like the same attention. The Jamaican situation is getting so bad, with the government doing nothing about what seems to be a wave of murders and violent attacks, that the veteran, exiled gay leader Maurice Tomlinson is on the verge of calling for economic sanctions.

Should Tomlinson call for sanctions — and get support from the organised Jamaican LGBT community — I wonder if that will break through and get anything approaching the attention Russia has? I have to say I’m cynical.

Jamaica, however, does get at least some attention but there have been three recent stories which leapt out at me and I think deserve at least some coverage (as opposed to none) because they obviously qualify as serious news.

Belarus is the former Soviet republic now known as Europe’s ‘last dictatorship’. It’s leader, Lukashenko, has accused ‘the West’ of trying to turn Slavs gay and is known for bon mots on the gays like that ‘women become lesbians because men are worthless’.

The country may not yet have a ‘gay propaganda’ law like Russia’s but there have been repeated rumours that it might actually recriminalise gay sex. When a gay group tried to officially register last December police raided gay clubs and activists found themselves hauled into police stations, one had his passport confiscated.

Now the government has adopted new policy on ‘the fight against terrorism’ which extends the logic of some of the statements coming from Eastern Europe (or from some anti-gay American activists for that matter): gay activism is ‘terrorism’:

The document also notes that the internal source of a terrorist threat can become a “weakening of patriotism and traditional moral values among the youth due to the insufficient level of development of civil society, the destructive impact of information on the process of socialization of young people, a manifestation of trends towards the increased social stratification, the presence of a significant number of criminal and other unlawful acts against the person and property”

Given all else that has happened to them, local gay activists sound wearied. Alexandr Paluyan from Gay Alliance Belarus told me:

Relative to the new law. Indeed, information about non-traditional family values, as it used to be called in post-Soviet countries, the authorities can really be regarded as terrorism. Due to the fact that since the beginning of this year is the total pressure on the LGBT movement in Belarus, it is not excluded, and this fact is to apply the law in the future, however, it seems to me that this will not happen. But the fact of the possibility of equating LGBT activists as terrorists, and information resources called terrorist, of course, a matter of concern.

Exactly how this might work out for them seems, from the limited information I could find, opaque because exactly how the policy will be applied is not clear. Nor is whether the equation of gay activists with terrorists will spread, but I would not be shocked if it does.

Last month amongst the Russia-related coverage National Geographic ran a story reminding everyone that 76 countries criminalise gay sex and ran through details on some of the worst places to be gay. In the midst of which this caused a double take:

An updating of Iran’s penal code in May 2013 criminalized homosexual identity, rather than specific acts, making it punishable by 31 to 74 lashes.

There was no source given in NatGeo’s story but I tracked it down to the veteran Iran watcher Hossein Alizadeh at the International Gay and Lesbian Human Rights Commission (IGLHRC). He confirmed it:

The new Iranian Penal code that was passed by the Guardian Council of the Constitution in Iran on May 1, 2013, states, “male homosexuality , in other cases rather than lavat [sodomy] and tafkhiz [rubbing penis between another man’s tights without penetration], such as passionate kissing and lustful touching – is punishable by 31 to 74 punitive lashes of 6th degree.” [Article 237].

The wording of the law [such as..] allows the judge to consider any other “homosexual” conduct – whether imaginary or real – as deserving punishment …. This vague law, in practice, paves the way for the punishment of anyone arrested on suspicion of homosexuality, but can’t be tried on sodomy charges due to the lack of evidence.

(Here’s the full text of the law on the Guardian Council’s official website.)

I looked. This story got no publicity, in English at least. Why did the Iranian regime do this and what might it portend? I know reporting from Iran is difficult if not impossible but it would be good if some news outlet at least reported that this happened, and answered that question.

Alongside Albania, Turkey is a Muslim-majority country which does have legal protections for LGBT people.

Contrary to preconceptions, those protections aren’t the result of European Union pressures but of Turkey’s thriving LGBT movement and the political support it receives.

The proposed new constitution is controversial, with many seeing it as a power grab for the ruling Justice and Development Party, or AKP, and Prime Minister Erdogan. However the current draft does, in a concession from the AKP, include “sexual orientation and gender identity, and other factors” as protected classes.

The language is in the preamble rather than the main text but even that concession, won by opposition politicians from the BDP (Peace and Democracy Party) and CHP (Republican People’s Party), is being seen as a “milestone”, according to Turkish politician Rıza Türmen and IGLHRC:

That identities be recognized at a constitutional level, even if it is in the preamble, by constitution drafters, is a significant gain for the LGBT. This step is a milestone for LGBT people in the Republic of Turkey’s constitutionalism.

If the constitution is passed it would be Turkey which would become the third country (after South Africa and, as I discovered, another very surprising African country) to offer LGBT explicit protections in its countries founding legal document. Yes, Turkey …

There may be different reasons why these three stories aren’t surfacing in international media but they’re all information which should be more widely known.