It was 136 years ago today, during the Great Railroad Strike of 1877, that the following letter (happily preserved for posterity) was sent: 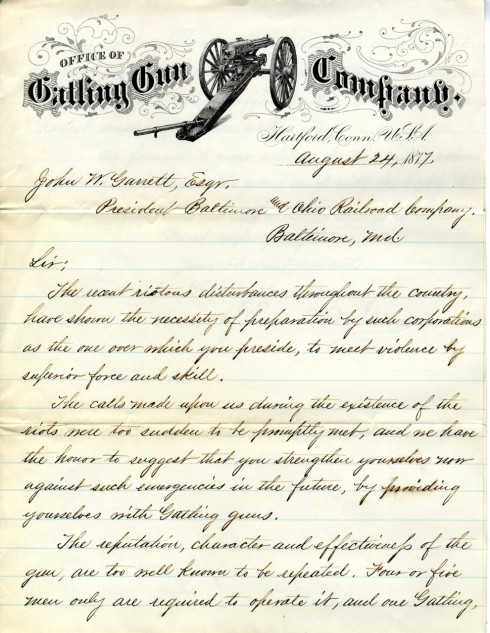 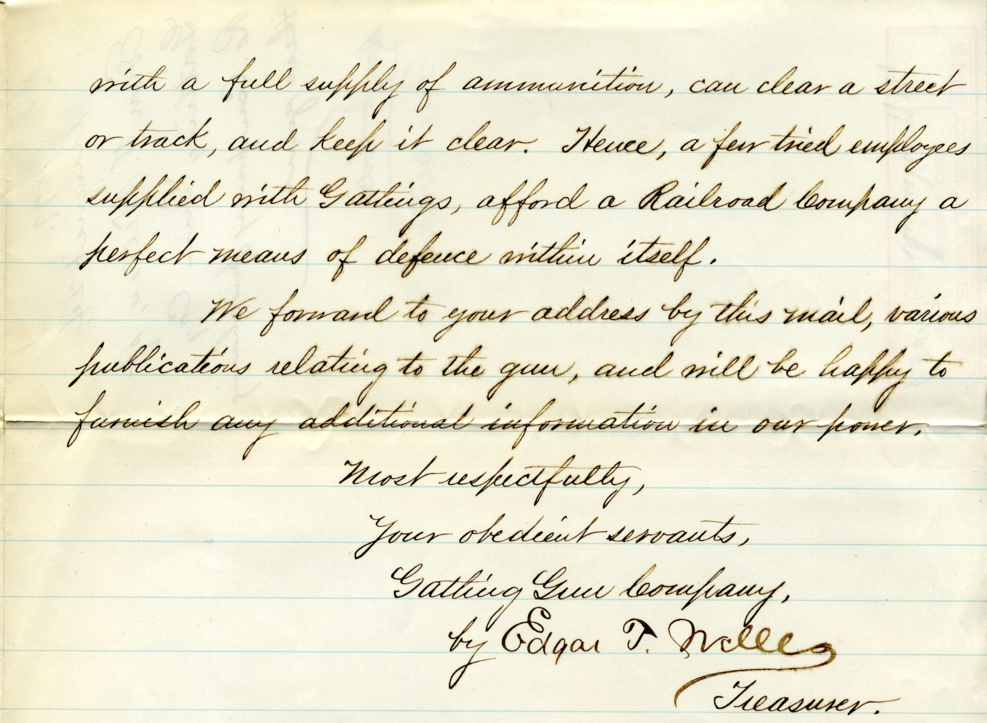 The recent riotous disturbances through out the country have shown the necessity of preparation by such confrontations as the one over which you preside, to meet violence by superior force and skill.

The calls made upon us during the existence of the riots were too sudden to be promptly met, and we have the honor to suggest that you strengthen yourselves now against such emergencies in the future, by providing yourselves with Gatling guns.

The reputation, character and effectiveness of the gun, are too well known to be repeated. Four or five men only are required to operate it, and one Gatling with a full supply of ammunition, can clear a street or track, and keep it clear. Hence, a few tried employees supplied with Gatlings, afford a Railroad Company a perfect means of defence within itself.

We forward to your attention by this mail, various publications relating to the gun, and will be happy to furnish any additional information in our power.

In 1877, northern railroads, still suffering from the Financial Panic of 1873, began cutting salaries and wages. The cutbacks prompted strikes and violence with lasting consequences. In May the Pennsylvania Railroad, the nation’s largest railroad company, cut wages by 10 percent and then, in June, by another 10 percent. Other railroads followed suit. On July 13, the Baltimore & Ohio line cut the wages of all employees making more than a dollar a day by 10 percent. It also slashed the workweek to just two or three days. Forty disgruntled locomotive firemen walked off the job. By the end of the day, workers blockaded freight trains near Baltimore and in West Virginia, allowing only passenger traffic to get through.

Also in July, the Pennsylvania Railroad announced that it would double the length of all eastbound trains from Pittsburgh with no increase in the size of their crews. Railroad employees responded by seizing control of the rail yard switches, blocking the movement of trains.

Soon, violent strikes broke out in Baltimore, Chicago, Kansas City, Pittsburgh, St. Louis, and San Francisco. Governors in Maryland, Pennsylvania, and West Virginia called out their state militias. In Baltimore, Charles A. Malloy, a 20-year-old volunteer in the Maryland National Guard, described the scene: “We met a mob, which blocked the streets. They came armed with stones and as soon as we came within reach they began to throw at us.” Fully armed and with bayonets fixed, the militia fired, killing 10, including a newsboy and a 16-year-old student. The shootings sparked a rampage. Protesters burned a passenger car, sent a locomotive crashing into a side full of freight cars, and cut fire hoses. At the height of the melee, 14,000 rioters took to the streets. Maryland’s governor telegraphed President Rutherford Hayes and asked for troops to protect Baltimore.

“The strike,” an anonymous Baltimore merchant wrote, “is not a revolution of fanatics willing to fight for an idea. It is a revolt of working men against low prices of labor, which have not been accomplished with corresponding low prices of food, clothing and house rent.”

I can find no evidence on how Garrett responded to the Gatling sales pitch, but the strike was eventually crushed.

It appears that some 40 people were killed in the violence in Pittsburgh. Across the country more than a hundred died, including eleven in Baltimore and a dozen in Reading, Pa. By the end of July, most strike activity was over. But labor strikes in the rail yards recurred from 1884 to 1886 and from 1888 to 1889 and again in 1894.

Native-born Americans tended to blame the labor violence on foreign agitators. “It was evident,” said the Annals of the Great Strikes in the United States, published in 1877, “that there were agencies at work outside the workingmen’s strike. The people engaged in these riots were not railroad strikers. The Internationalists had something to do with creating scenes of bloodshed…. The scenes…in the city of Baltimore were not unlike those which characterized the events in the city of Paris during the reign of the Commune in 1870.”

The New York World blamed “the hands of men dominated by the devilish spirit of Communism.” Vladimir Lenin was seven years old at the time.

I discovered a series of videos of an old friend from my St. Louis days, the labor historian Rose Feurer, speaking at an event a couple of years ago marking the anniversary of a general strike in the St. Louis area, AKA Reign of the Rabble, which grew out of the railroad strike.