This is a cross-post from John Sargeant at homo economicus 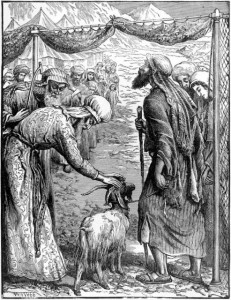 Once in ancient times when woes happened on a people, rituals were performed. A high priest would enter a temple having taken on, and hopefully been cleansed for, the sins of the nation. After this a rope was tied round him before he went to meet the divine presence in the Holy of Holies in case God did smite him, and they could drag him out. If sins forgiven, he would come out alive without being tugged.

The more common one we think of is such sins being transferred into a goat that would be driven out of the community into the wilderness – the legendary scapegoat of Leviticus 16.

In modern times those to be scapegoated are five percent of the population:

There’s a problem within Islam, this is true, but unless people stop screaming racist, bigot, fascist, hate monger and resort to insults and threats at those who criticise/hold an opinion then we will never ever see peace in our lifetime, muslim population is less than 5% of the UK population yet it’s in our media and lives daily, what happens when it gets bigger? You may not care enough today, but what about tomorrow, if we don’t do something about our concerns today then next generations will say “what the hell did our parents/grandparents do”…

At least mine will say “she tried”

Invited by a blogger to shed a tear reading that last line, I wonder what frenzy of fear must grip someone to think there will be no peace in the land of hope and glory while Muslims reside amongst us, only adding to our problems if they breed? A shiver up my spin was my reaction instead. A group of easily identified people were the problem while the solution was left hanging.

Martin Amis, in remarks he now regrets making, summed up the scapegoating principle:

There’s a definite urge—don’t you have it?—to say, “The Muslim community will have to suffer until it gets its house in order.” What sort of suffering? Not letting them travel. Deportation—further down the road. Curtailing of freedoms. Strip-searching people who look like they’re from the Middle East or from Pakistan. . . . Discriminatory stuff, until it hurts the whole community and they start getting tough with their children. . . . They hate us for letting our children have sex and take drugs—well, they’ve got to stop their children killing people.

The blogger that took “there’s a problem … ” quote above from the post of an English Defence League (EDL) supporter made this remark which they shared with me in a new post:

The painful truth is that we are in deep, deep waters precisely because many Muslims are correctly interpreting an ideology which is demonstrably intolerant, disturbing and violent. People don’t understand just how poisonous this ideology is and they don’t understand the cancer of self-censorship and fear gnawing away rabidly at free speech, because they haven’t got even the slightest clue how important free speech is to our way of life. [Source]

Political Islamism is an ideology within Islam – calling it the correct interpretation is as ludicrous as denying it has anything to do with Islam. Looking at other faiths people have similarly found inspiration to legitimise intolerance and violence whether in Rwanda or the Balkans. Religion far from helping to bring people together sets them apart.

Religion is a problem and political Islam the biggest challenge we all face including Muslims who suffer the most from it.

Will intransigence by the educated middle class result in us “living under full fat sharia” as the blogger states:

Only at that point might they beg their unwashed underclass to fight this apocalyptic war for them. The only thing stopping them from asking now is that they’re too fucking stupid to realise we’re already at war. [writers own emphasis]

Sharia would be an anathema to the human rights model that we esteem in this country, and secularism means freedom of religion and lack of coercion in matters of religion. Multiculturalism should not mean human right abuses like female genital mutilation being tolerated. Yet when I have seen Muslims on twitter with secularised renderings of Koran and Hadith I have seen non muslims tell them they are not sticking to the “correct” fundamentals of their faith. What version of Islam do we want for goodness sake! Is the war to be fought against our own people or is there a better way than using such rhetoric on a whole people who are not terrorists, just Muslims.