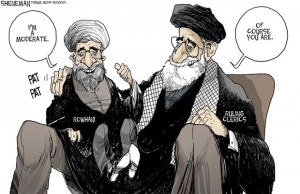 Our dear Imam [the late Ayatollah Khomeini] said that Israel must be wiped off the map and this was a very wise statement. We cannot compromise over the issue of Palestine.

The meaning of these words, arguably the most notorious Iran’s erstwhile President ever uttered, is neither unclear nor complicated. But within days of being reported in the Western media, they had nonetheless become the subject of a fierce quarrel about the nature and intentions of the Iranian regime. Enemies and critics of Iran’s theocracy insisted they were a testament to Tehran’s pathological anti-Semitism and proof of its genocidal agenda, the furtherance of which is evidenced by their ongoing and unlawful pursuit of apocalyptic weaponry.

Enemies and critics of the West, on the other hand, protested that Ahmadinejad’s words had been mistranslated, misunderstood and misused by neo-Imperialists agitating for a pre-emptive attack on the sovereign state of Iran. This was in spite of the fact that the contested English translation had been provided, not by a neo-Conservative think-tank, but by Iranian State media. So Ahmadinejad’s quote was subjected to a word-for-word literal translation, which resulted in the following revised version:

In spite of all the complaining, it ought to be obvious to anyone capable of a dispassionate assessment that both translations explicitly express the same unambiguous belief: that the world’s only Jewish State must be destroyed and replaced by a 23rd Arab State. If anything, the revised translation is even more sinister, as it carries the implication that the entire Zionist project be consigned to some kind of ghastly Orwellian memory hole.

Nonetheless, the trivial differences between the two versions were enough to persuade Iran’s defenders in the Western press that Ahmadinejad’s words were completely harmless. As the ever-indulgent Jonathan Steele explained to his readership at The Guardian:

[Ahmadinejad] was not making a military threat. He was calling for an end to the occupation of Jerusalem at some point in the future. The “page of time” phrase suggests he did not expect it to happen soon. There was no implication that either Khomeini, when he first made the statement, or Ahmadinejad, in repeating it, felt it was imminent, or that Iran would be involved in bringing it about.

Steele concluded by recommending that Ahmadinejad’s statement should not only be considered benign, but also appeased and rewarded with immediate, unconditional bilateral talks.

Juan Cole, meanwhile, in the midst of a bad-tempered complaint about (among other things) “the Orientalist Hitchens”, offered that:

[T]he actual quote, which comes from an old speech of Khomeini, does not imply military action, or killing anyone at all . . . The phrase [“vanish from the page of time”] is almost metaphysical.

One is entitled to wonder if the implications of “almost metaphysical” phrases change when they are draped across missiles capable of hitting Israeli targets, and proudly displayed during official Iranian military parades.

Or if they are delivered by the President of a nation pursuing an illegal nuclear programme at a conference in its capital city entitled “The World Without Zionism”. And during a speech in which he also stated:

This false philological quarrel erupted again over the weekend, when it was reported that, during an al Quds day rally, the new ‘moderate’ President-elect of Iran, Hassan Rouhani had said:

The Zionist regime is a wound that has sat on the body of the Muslim world for years and needs to be removed.

Once again, the English translation came from an Iranian source, not an American one. Once again, it was hotly contested. And, once again, the corrected version was scarcely less sinister than its predecessor:

There is an old wound on the body of the Islamic world, under the shadow of the occupation of the holy lands of Palestine and Quds [Jerusalem]. This day, is to remember that the Muslim population, will not forget its historic right and will resist tyranny and occupation.

And yet, it was claimed by some that this exonerated the regime of genocidal intent. It is worth bearing in mind that when Rouhani – or any other Iranian official for that matter – speaks of the “the occupation”, he is not referring to the West Bank and East Jerusalem, but to Israel too.

And thanks to the arms and funds Iran provides for its fascist Shi’ite proxy Hezbollah and its fascist Sunni clients Hamas and Islamic Jihad, we know what constitutes Iran’s preferred method of “resistance”. Hamas are committed by their loathsome charter to driving every last Jew from ‘historic’ Palestine. Not content with that, Hezbollah have committed themselves to the eradication of Jewry worldwide. As their Secretary-General Hassan Nasrallah said in 2002:

Islamic prophecies and not only Jewish prophecies declare that this state [Israel] will come into being, and all the Jews of the world will gather from all corners of the world in occupied Palestine. But this will not be so their false messiah [al-Dajjal] can rule in the world, but so that God can save you the trouble of running them down all over the world. And then the battle will be decisive and crushing.

This is just the first section of the article. Do read the rest here.