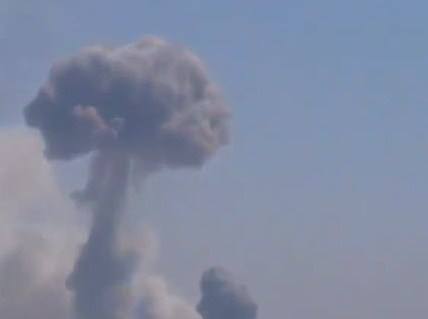 A story is circulating on the Internet – particularly on conspiracy theory sites (who see the deletion as proof of a cover-up) that Israel deployed nuclear weapons during a strike on Syria. The source of the story, or so it appeared, was not some tinfoil madhatter nor some frothing propagandist but a senior journalist at a respected news organisation: Jon Snow of Channel 4 News.

The story has – for obvious reasons – been deleted, but claims that it was published by Channel 4 seem born out by its existence in Google’s cache, and (see below) it still shows up in search results.

If true, it would have been astonishing. What was Jon Snow trying to do? Start World War III? Provoke a nuclear retaliation against Israel? Incite the extermination of the Jews? How could a journalist could act so stupidly, recklessly and dangerously?

Fortunately, neither Jon Snow nor Channel 4 have lost their marbles, but it does seem they have lost the password to their blog to the “Syrian Electronic Army” who took over the website. The entire C$ blog has been taken offline as a precaution.

The purpose of the hack was to plant a bogus story in which a senior journalists at a leading news network would give credibility to the quote:

The likely assailant in both cases is Israel he claims: “Israel is the only nation that can deploy these sorts of weapons with impunity without fear of a counter-attack. Syria has shown no appetite to get into a shooting fight even over the deployment of such weapons”.

Unfortunately it matters little, or rather ‘only a little less’ since claims that nuclear weapons are or will be used by the Americans and/or Israel is already a powerful propaganda meme. Press TV flirted with these claims a few months ago and a bit of googling will show exactly how widespread they are now.

Cyber ‘warfare’ is also on the increase. Regular readers of Harry’s Place will know how often this blog is molested by denial of service attacks. For its part, the Syrian Electronic Army have attacked several media outlets, including the BBC, Reuters, The Washington Post, and even the Onion.

They now seem locked in cyber-battle with that group Anonymous (who have been targeting Syrian regime servers). Of course since the Internet is the global village, we’re all bound to be caught in the crossfire.