Or, as some may see it, more Zionist trickery.

As fighting between Syrian government forces and rebels has raged in recent months in areas close to the Israeli-held Golan Heights, scores of Syrian casualties have been discreetly spirited across the hostile frontier for what is often lifesaving treatment in Israel, an enemy country.

Most are men in their 20s or 30s, many of them with gunshot wounds who presumably were involved in the fighting. But in recent weeks there have been more civilians with blast wounds, among them women and children who have arrived alone and traumatized.

Israel has repeatedly declared a policy of nonintervention in the Syrian civil war, other than its readiness to strike at stocks of advanced weapons it considers a threat to its security. Officials have also made clear that Israel would not open its increasingly fortified border to an influx of refugees, as Turkey and Jordan have, given that Israel and Syria officially remain in a state of war.

But the Israeli authorities have sanctioned this small, low-profile humanitarian response to the tragedy taking place in Syria, balancing decades of hostility with the demands of proximity and neighborliness.

“Most come here unconscious with head injuries,” said Dr. Masad Barhoum, the director general of the Western Galilee Hospital here in Nahariya, on the Mediterranean coast six miles south of the Lebanese border. “They wake up after a few days or whenever and hear a strange language and see strange people,” he said. “If they can talk, the first question is, ‘Where am I?’ ”

He added, “I am sure there is an initial shock when they hear they are in Israel.”
…..
Like many Israeli hospitals, this one serves a mixed population of Jews and Arabs; its staff includes Arabic-speaking doctors, nurses and social workers. In the lobby, a glass display case contains the remnants of a Katyusha rocket that was fired from Lebanon and hit the hospital’s eye department during the 2006 war between Israel and Hezbollah. The rocket penetrated four floors but nobody was injured because all the north-facing wards had been moved underground.

With more than 100,000 people estimated to have died in the Syrian civil war, Dr. Barhoum, an Arab Christian citizen of Israel, acknowledged that the Israeli medical assistance was “a drop in the ocean.”

But he said he was proud of the level of treatment his teams could provide and proud to be a citizen of a country that allowed him to treat every person equally. He said the cost of the treatment so far had amounted to hundreds of thousands of dollars and would be paid for by the Israeli government.
…..
Little has been revealed about how they get here, other than that the Israeli military runs the technical side of the operation. The doctors say all they know is that Syrian patients arrive by military ambulance and that the hospital calls the army to come pick them up when they are ready to go back to Syria.
…..
Lt. Col. Peter Lerner, a military spokesman, said that “a number of Syrians have come to the fence along the border in the Golan Heights with various levels of injuries.”

He added that the military has, “on a purely humanitarian basis, facilitated immediate medical assistance on the ground and in some cases has evacuated them for further treatment in Israeli hospitals.”

Now, efforts are under way to bring over relatives to help calm the unaccompanied children.

When [a 13-year-old girl badly injured by shelling] arrived, she was in a state of fear and high anxiety, according to Dr. Zeev Zonis, the head of the pediatric intensive care unit here.

“A large part of our treatment was to try to embrace her in a kind of virtual hug,” he said.

Days later, the girl’s aunt arrived from Syria. She began to care for the Syrian children here, living and sleeping with them in the intensive care unit. The staff and volunteers donated clothes and gifts.

The aunt, her face framed by a tight hijab, said a shell had struck the supermarket in their village suddenly, after a week of quiet. A few days later, she said, an Arab man she did not know came to the village.

“He told us they had the girl,” she said. “They took me and on the way told me that she was in Israel. We got to the border. I saw soldiers. I was a little afraid.”

But she added that the hospital care had been good and that “the fear has passed totally.” She was reluctant to speak about the war back home, saying only, “I pray for peace and quiet.”

Sitting up in bed in a pink Pooh Bear T-shirt, the niece, who was smiling, said she missed home. She and her aunt were expected to return to Syria later this week.

Asked what she will say when she goes back home, the aunt replied: “I won’t say that I was in Israel. It is forbidden to be here, and I am afraid of the reactions.” 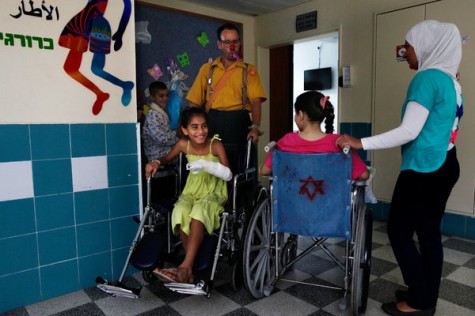 An Israeli girl, left, and a Syrian girl, wounded in her country’s civil war, meeting at the Western Galilee Hospital in Nahariya, Israel, where scores of Syrians have been taken for treatment.

Note what Roger Waters considers the symbol of evil on the Syrian girl’s wheelchair– suitable only for including on inflatable pigs for subsequent destruction.