Moazzam Begg, a former Taliban volunteer who now runs the salafi jihadi support group, CagePrisoners, had this to say yesterday. 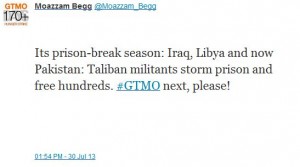 Possibly Begg felt guilty for identifying long serving Guantanamo inmate, Shaker Aamer, as a prominent “recruiter for Al Qaeda”: one of the reasons that he’s still there.

Begg believes that working for the release of prisoners who have been captured when engaged in “jihad” is a religious obligation which falls on all Muslims. So, of course, he’s a supporter of these prison breaks.