Readers will probably recall the old Militant Tendency that used to inhabit the Labour Party back in the late seventies and early eighties. At one point they even managed to have three of their members as Labour MPs. All that went pear shaped after the debacle in Liverpool council. Neil Kinnock made his now famous speech about “a Labour Council sending out redundancy notices by taxi to its workers. That was them and that was then.

Despite being kicked out of the Labour Party and changing their name to the Socialist Party, the same people are still around and have taken over the main civil service union, the PCS whilst their co-thinkers in Ireland have managed to get one of their number into the European Parliament. The British group is believed to have around 2,000 members and the Irish one about 100, though their Irish “Central Committee” consists of about 35 of them. Top heavy one would think.

However of all the organisations on the far-left, the Socialist Party has been considered by many to have always held a “reasonable” stance on the Israel/Palestine conflict and is ostensibly committed to a two state solution. Further they are known to be “ambivalent” on the question of Boycotts as Judy Beishon writes:

Israeli Jewish workers genuinely fear for their own security and want to protect the state that was intended to be a safe haven for Jews. This, with the constant barrage of propaganda, unsurprisingly leads them to believe that advocates of the BDS campaign around the world don’t understand the situation in Israel. Also, many of the Israeli Jews who are most critical of their government’s brutality against the Palestinians, at the same time don’t see why Israeli workers should be punished for it by suffering the effects of boycotts.

Another major problem with blanket boycotts is that they are often promoted by organisations or groups that dismiss all Israelis as colonial settlers and are very hostile to the Israeli working class, writing it off as adopting Zionist or racist ideology and incapable of acting as a progressive force. Some organisations don’t even accept that Israel has a working class. However, while BDS campaigns can help express outrage and hit the interests of some of the Israeli capitalists, the much bigger threat to the profits of those capitalists lies in industrial action by Israeli workers. Boycotts are an irritant to the Israeli ruling class compared to the threat that determined action by Israeli workers can be to their profits – and, eventually, to their rule.

“So far so good” I suppose given their Marxist politics. Except there is now a problem, in the sister organisation of the Socialist Party in Ireland. According to the Jerusalem Post:

In an interview last week with the Russia-based television network RT, Paul Murphy, a Socialist Party MEP for Dublin, said that a “struggle” along the lines of the first intifada was “necessary.”

You’ve seen significant protest, significant movement, the potential to redevelop a struggle along the lines of the first intifada.

That’s the kind of thing that is necessary,” he said.

“Such a movement could link up with the genuine Israeli left, with working people and young people, who don’t benefit from the oppression of the Palestinians, overthrow the capitalist establishment of Israel.”

In other words lets go for violence, because that’s what such an “intifada” would involve and bring injury and death to ordinary Israelis and Palestinians alike.

Murphy has taken umbrage with widespread condemnation his words on RT have caused. In a press release on his blog he defends his words. In an attack on what he calls “mock outrage” by fellow MEPs he says:

The MEPs who have condemned my call for a mass movement along the lines of the first intifada as a call for violence and terror are either deliberately misconstruing my words or are entirely ignorant about the history of the Palestinian struggle. Intifada is simply the Arabic word for ‘uprising’, something that is entirely justified and clearly necessary when you look at the ongoing oppression.

The real face of the Socialist Party is shown. Despite in both this country (in the form of the Trade Union & Socialist Coalition) and in Ireland they try to present themselves as trying to create “a real Labour Party”. Nothing could be further from the truth. They are followers of Lenin and Trotsky, supporters of a violent revolution to “overthrow capitalism”.

Anyone who has had any direct dealings with them knows that they are hard line centralised bureaucrats that even Stalin would be proud of and cannot be trusted to act on any ones behalf.

Lenin placed a high significance on the writings of Sergei Nechaev whose most well known work was Revolutionary Catechism (1871) in which he laid down the rules of the comrades path when he wrote:

The revolutionary is a dedicated man. He has no personal feelings, no private affairs, no emotions, no property, and no name. Everything in him is subordinated to a single exclusive attachment, a single thought and a single passion – the revolution.

In other words they should renounce basic humanity.

To them people don’t matter, only their ideas. That’s why these people can never be trusted and why Marxism always leads to mass murder.

As far as the Middle East goes I can only repeat the words written by Professor Alan Johnson recently:

The TUC and ITUC have worked for over forty years to build bridges between the Histadrut and the PGFTU. Those efforts bore fruit in 2008, with a landmark agreement between the two federations. We should not let sectarians and political activists in the West ruin all that work. 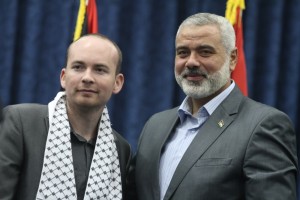